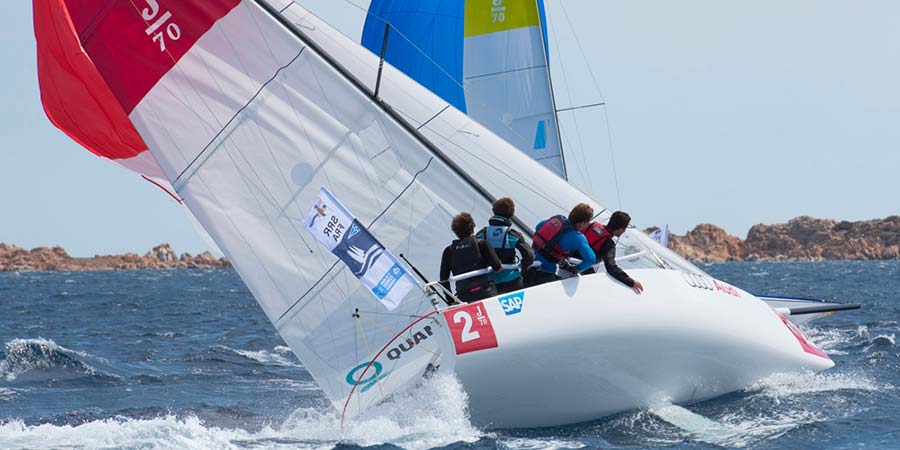 After three days of thrilling racing, a range of challenging sailing conditions and a host of social events, the Royal Norwegian Yacht Club (Kongelig Norsk Seilforening, KNS) has been crowned victor of the SAILING Champions League 2015 and claimed the title of “Best Sailing Club”. Second place went to the home team representing the Yacht Club Costa Smeralda and Russia’s Yacht Club Navigator took third place. The event ­– held from 18th to 20th September in Porto Cervo, Sardinia – played host to 30 top sailing clubs from across Europe.

The final day of racing brought a change from the strong mistral breeze that teams had faced over the previous two days. As the wind moved to a more northerly direction and turned lighter and more shifty those competitors who thrive in light airs had a chance to shine in today’s 12 races. There was little hope, however, of ousting the reigning KNS team of Kristoffer Spone, Christen Horn Johannessen, Sigurd Paulsen and Erik Kongshaug who deservedly held on to first place thanks to seven victories and two second places out of 10 flights raced.

“We were a bit excited today, because we didn’t know how it would go,” commented Royal Norwegian skipper Kristoffer Spone, “but now we have the trophy, we are very happy. The level of competition at the SAILING Champions League was very high, so it’s a very good feeling having won against the best clubs in Europe. It has been a terrific event here in Porto Cervo.”

Second-placed Yacht Club Costa Smeralda flew the home flag high by chalking up six victories over the weekend while Yacht Club Navigator of Moscow claimed five wins to take third place overall. YCCS team captain Federico Michetti commented on the Club-centred ethos that is at the heart of the Sailing Champions League concept: “It was an honour to compete here for my club together with the team. These were great races with a superb organization behind them. It’s a format where you can really feel how everyone is fighting for their Club and think that is important.”
“As always our thanks go to everyone who made this event possible: the race committee, jury, umpires and the sponsor Audi as well as all of the teams who travelled from across Europe to participate in this first event in our waters.” commented YCCS Commodore Riccardo Bonadeo during this afternoon’s prize giving ceremony.

In addition to the Robbe & Berking Trophy for the winning Club, trophies were awarded to the  second and third-placed yacht clubs. Special prizes were also awarded to the Yacht Club Malta, whose team was entirely composed of members of the same family, and the Royal Danish Yacht Club, who fielded and all-female team.