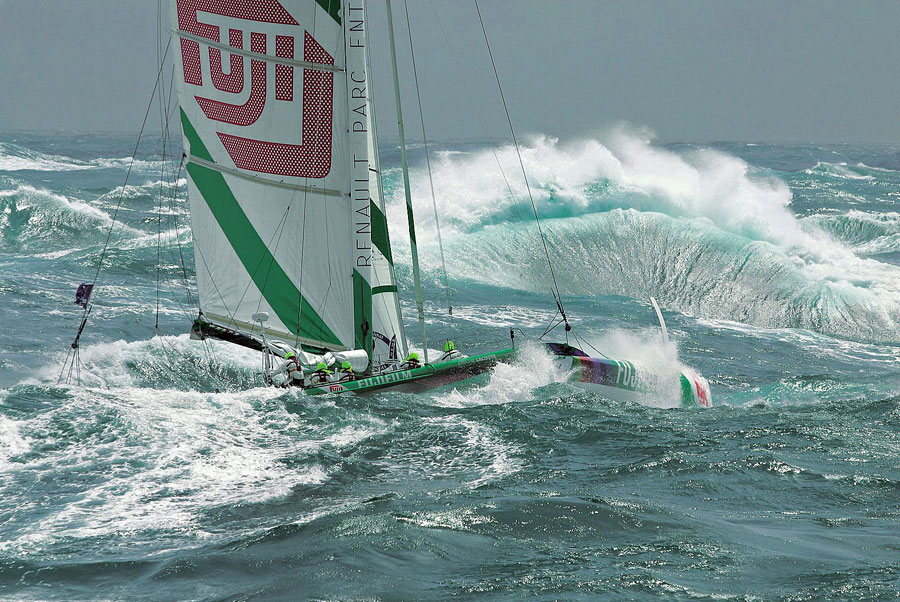 20 years have passed, but this photo of Fujifilm II taken by Gilles Martin-Raget is always so exciting. This is the Orma 60 Fujifilm Loick Peyron, in a storm near Ouessant (Brittany) during the Course des Phares in 2002. A photo that made the history of sailing.

During the Course des Phares 2002, the Orma 60 trimaran Fujifilm II skipper Loic Peyron, is sailing through a very special piece of water located south of Ushant Island (west tip of Britanny, France) named “The devil’s hole”. There, the tide current coming out of the Channel hit the north Atlantic swell going the opposite direction in very shallow waters.

The combination of these natural elements creates instant pyramidal waves like the ones that can be seen at the mouth of a river. The wind was not blowing more than 25 knots, and the basic swell was about 2 m. The helicopter pilot Daniel Manoury who, at that time, was regularly coming here for shooting storms said after landing: “Today the weather was nice. Sometimes, in winter, during storms, this place really gives you an idea what the inferno is”.

Fujifilm II happened to pass safely the difficulty and won the race organized by Royale Production, the organization I was shooting for at the time. Unfortunately, Fujifilm II was destructed by a storm a few months later during the Route du Rhum 2002. Another story behind this photo is that it was taken with a digital camera, one of the real first good ones (35 mm slides were still the standard at that time).

The jpg original file is 2,70 mb only, and, after a necessary reduction in size and weight, it was sent through the internet a few minutes later, after the helicopter had landed on a beach nearby, with one of those external modems that was much noisier than anything else, certainly not quick! But it worked, and it was probably the beginning of a new era, though it took another 3 years to abandon definitively the slides and shoot with digital cameras only.