Look back to the pre-start period of the last edition of the Transat Jacques Vabre, the two handed Transatlantic race from Le Havre to Brazil two years ago, and there were clear favourites in most classes. But ocean racing is a mechanical sport which is entirely reliant on what the weather and sea conditions deliver. And so there may be pre-race race favourites but there is no such thing as a certainty.

Picking winners from the four classes of 2013 was easier. The Multi 70 class was just two strong, the IMOCA 60s were in the middle of the four year Vendée Globe cycle, the Multi 50s had a well established form book and in the highly competitive Class 40 fleet there was one dominant boat.

But for all that who could have predicted that top contenders Lalou Roucayrol and Mayeul Riffet would capsize their Multi50 and that the IMOCA dream team of Francois Gabart and Michel Desjoyeaux would be dismasted?

Class 40, the New Generation?
It is a more compact class than in 2013 and the fleet is arguably more evenly matched. It is likely to be down to the sailors on deck and the way they sail. From that point of view Le Conservateur (Verdier 2014) of Yannick Bestaven and Pierre Brasseur are reckoned to be just a tiny bit ahead of Bretagne-Crédit Mutuel Élite of Nicolas Troussel and Corentin Horeau who have the Humphreys designed ex Vaquita and TeamWork 40, the Sam Manuard designed ex Mare of Betrand Delesne and Switzerland’s Nils Palmieri.

The radical, fast Ker deigned Team Concise has yet to finish a Transatlantic race but in the hands of British/Australian Figarist Jack Boutell who selected fellow Figarist Gildas Mahé has huge potential. They have trained hard alongside Trousseel/Horeau.

The newer boats can upset the odds. Most recent launches are Eärendil (Catherine Pourre, Antoine Carpentier) and V & B (Maxime Sorel-Sam Manuard). 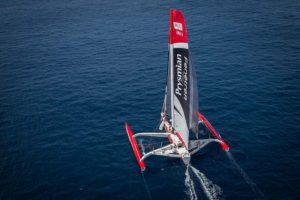 The Class is not as strong as in 2013 the two likely favourites are expected to be FenêtréA-Prysmian which is the defending champion. Erwan Le Roux has sailed the boat since 2009 and sails with the Italian Giancarlo Pedote. Their rivalry with Arkema, Lalou Roucayrol sailing with sailmaker Cesar Dohy is evenly matched and should go down to which duo sails faster and makes the better decisions, but it should be close. French Tech Rennes-Saint Malo has never managed to win (except the Route du Rhum 2010 with Lionel Lemonchois), but Gilles Lamiré is regularly on the podium and is supported by the legendary Yvan Bourgnon.

IMOCA – Open Season
The IMOCA class is too close to call. First there is the fundamental question. Will one of the new foil assisted IMOCA’s run away with it or will the highly optimised, older generation IMOCAs which their skippers have sailed longer and harder prevail on this occasion?

On paper the most optimised boat with the most racing miles is the defending champion, PRB of Vincent Riou who sails with Seb Col. SMA, formerly the 2012 Vendée Globe winning MACIF sails with skipper Paul Meilhat partnered by double Vendée Globe winner Michel Desjoyeaux. Jéremie Beyou won in 2011 alongside Jean Pierre Dick and is partnered this time on Maître CoQ by Philippe Legros. Their sistership Bastide-Otio (Kito de Pavant Régniau-Yann) can do well on a course DePavant knows well, second in 2011 with a young Francois Gabart. Recent training has had Quéguiner-Leukemia Hope (Yann Elies-Charlie Dalin) as the best of the older IMOCA.

Among the ‘New Generation’ it is clear that the development, learning and optimising time has been so short for some. Launched only last month it is hard to see Virbac Saint Michel deliver a record breaking fourth win for Jean-Pierre Dick who sails with Fabien Delahaye. Hugo Boss (Alex Thomson-Guillermo Altadill) has only eight days sailing under their belts and Thomson is looking to a relatively conservative race, the key objective being to finish and to learning their boat. Safran 2 (Morgan Lagravière-Nicolas Lunven) could be in the mix but the duo are new to the race in the IMOCA class.

The two most successful ‘foiling’ boats which have the most sailing and development are Banque Populaire VIII (Armel Le Cléac’h and Erwan Tabarly) and Edmond de Rothschild (Sébastien Josse and Charles Caudrelier). Of these two Josse and Caudrelier individually and together have the better record in the race, winning the Multi 70 together in 2013 and Caudrelier winning in the IMOCA on Safran with Marc Guillemot in 2011.

Ultime: The Big Favourites.
This foursome are big Box Office for the Transat Jacques Vabre, but are all quite different from each other. The favourite on paper might be Sodebo Ultim’, ex Geronimo which is sailed by Thomas Coville and Jean-Luc Nélias. The boat is one of the fastest and most powerful and crossed the Atlantic twice this summer and has been well optimised during last winter. The brand new MACIF of François Gabart who sails with the very experienced Pascal Bidégorry is still very early in the evolution of the VPLP design and so will likely sail fairly conservatively. Lionel Lemonchois knows Prince de Bretagne well, a turbo’d extended ORMA and sails with Roland Jourdain while Actual is the former Sodeb’O now sailed by Yves Le Blévec and Jean Baptiste le Vaillant.

On Sunday at 1330hrs, the starting gun for the 12th Transat Jacques Vabre will be fired off the la Hève headland near Le Havre. The 42 boats (14 Class40s, 4 Multi50s, 20 Imoca 60s and 4 Ultimes) will set off to sail on a crazy 5400 mile race course across the Atlantic to Itajaí. But before pointing their bows towards Brazil, the fleet will have to round the Seine-Maritime course mark off Etretat.