Friday the 13th might be unlucky for some, but not for British skipper Alex Thomson who has pulled back 85 crucial miles on Vendée Globe leader Armel Le Cléac’h in the last 24 hours.

Thomson revealed yesterday that in order to stand a chance of overhauling French skipper Le Cléac’h before the finish of the solo round the world race he must get to within 50 miles of him in the next few days.

At the 1400 UTC position report yesterday Thomson’s Hugo Boss was 216 miles adrift of Le Cléac’h’s Banque Populaire VIII as the pair passed to the west of the Cape Verde Islands. At the same time today that deficit was down to 131 miles as light winds forced Le Cléac’h to slow to just one knot compared to Thomson’s eight knots. Thomson too will see speeds drop as he hits the dead spot but with several days of light-wind sailing ahead before stronger south-easterlies fill in near the Azores even the smallest of gains were welcome.

Thomson was not the only one with reason to celebrate. Crossing the Equator yesterday 13 days, three hours and 59 minutes after rounding Cape Horn, Jean-Pierre Dick set a new race record for the passage. Incredibly he shaved almost 16 hours off the reference time of Vendée 2012-13 winner François Gabart of 13 days, 19 hours and 29 minutes.

In fact, Dick was just the first of four skippers to beat Gabart’s time. In stark comparison, race leader le Cléac’h was almost 32 hours slower than Dick over the same distance, but his woes did not stop there. His losses caused by a painful crossing of the Doldrums were today laid bare.

Fifteen of the race’s remaining 18 skippers made gains on Banque Populaire over the past seven days. Frenchman Eric Bellion has been by far the biggest winner in the last week, pulling back 641nm on Le Cléac’h, with Jean-Pierre Dick was next in line making back 388nm. Only Thomson and 17th-placed Pieter Heerema lost ground on Le Cléac’h, Thomson dropping 26nm to the leader and Heerema losing 10nm. 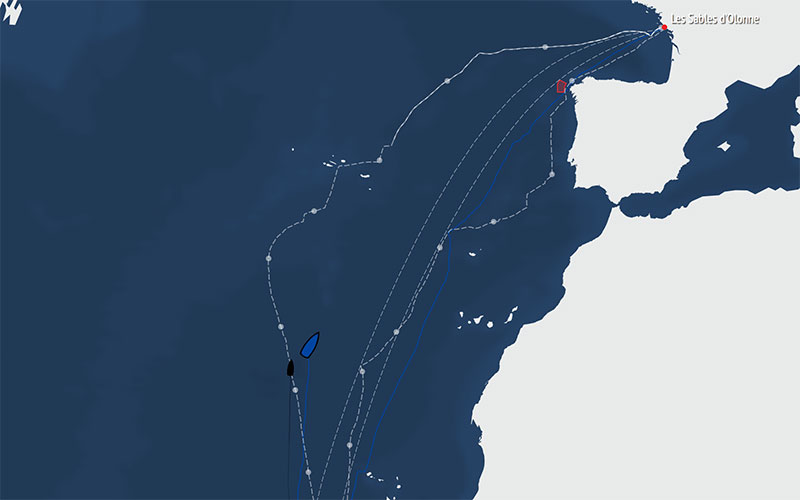 The Vendée Globe finish line is now within 1,800 miles of Le Cléac’h, and his ETA in Les Sables remains Thursday January 19th.