Armel Le Cléac’h and Alex Thomson today passed the magical mid-way point of the Vendée Globe solo round the world race when, in theory, their distance to the finish line back in Les Sables d’Olonne is less than the distance they have already sailed.

That psychological point where every mile feels like it is taking you closer to the finish line rather than away from the start line has been reached.


In practice, Armel Le Cléac’h led across the midpoint of the course around 1000hrs UTC this morning, passing from the Indian Ocean into the Pacific, at the longitude 146 deg 55’ E as specified by the International Hydrographic Office, at 1245hrs UTC. Thomson breached the midpoint at 1500hrs UTC.

The Banque Populaire skipper’s time to the gateway to the Pacific is still more than five and a half days faster than in 2012 when he crossed 6.3 miles behind François Gabart.

But the half way mark, and the Pacific, is bringing the leading duo their most brutal period of the race so far. A very slow moving deep low is effectively barring their route across the first miles of the Pacific, which is not living up to its name, nor its reputation. When they spoke in turn today to Vendée LIVE hosted at Race HQ in Paris both Thomson and Le Cléac’h said the next 36 hours are about boat and skipper preservation. 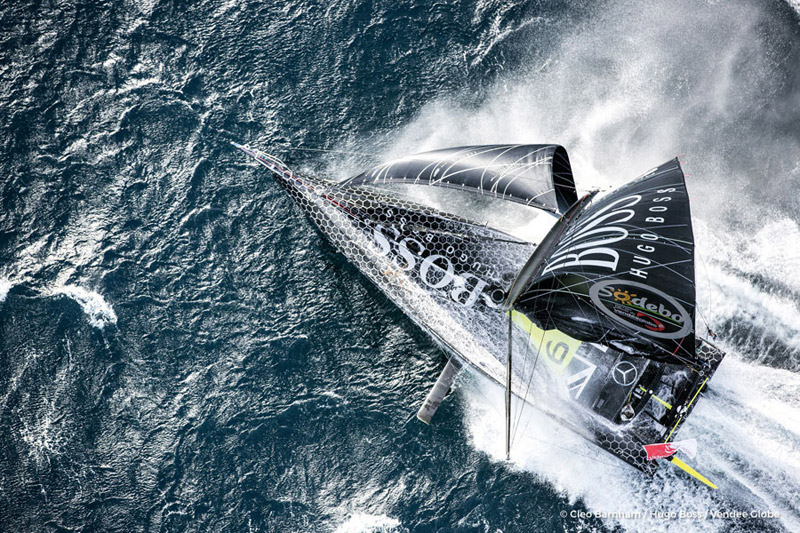 Spanish ocean racer Guillermo Altadill knows Thomson well. He finished second as co-skipper beside the British racer in the 2011 Transat Jacques Vabre and was co-skipper when the duo had to be helicopter rescued from the Atlantic, when the boat Thomson is racing now capsized in late October last year.

The duo were joined in a live link today, with Altadill in Sydney as Thomson sails past that longitude. Altadill, who admits he is addicted to the tracker, watching every four hours, warned: “This one is a pretty nasty low, very elongated from north to south. This is a time to survive.” 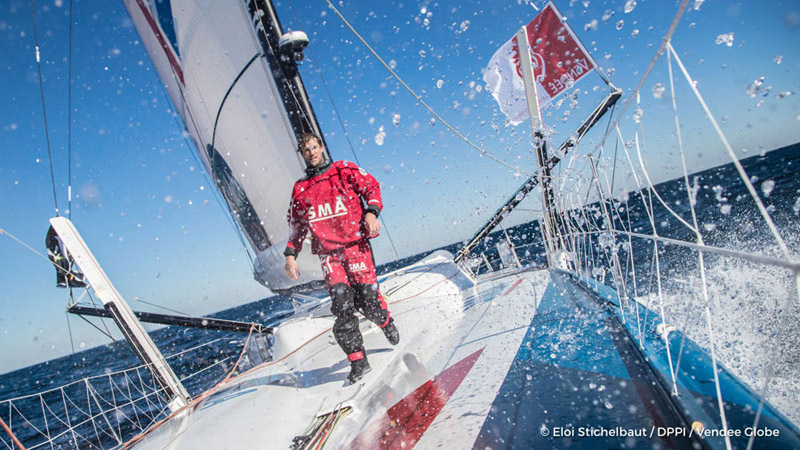 In third place Paul Meilhat crossed the longitude of Cape Leeuwin at 0940hrs this morning, some 2 days, 20 hours and 10 minutes behind the leader, his compatriot Armel Le Cléac’h. Meilhat is the best of the 14 rookies. Sailing the former MACIF which won the last edition of the race, Meilhat is two days and 13 hours ahead of the pace of Gabart in December 2012.

Sailing the conventionally configured, non-foiling SMA, he clearly is from the same gene pool as Gabart, still holding at bay the foil borne Jérémie Beyou (Maitre CoQ) and in fact was fastest in the fleet over the 24 hours to 1400hrs UTC, making 483 nautical miles in 24 hours, 43 more than Beyou.