Rob and Megan are an adventurous couple yearning for exploration. They are living on a sailboat and cruising the Inside Passage in Alaska. Traveling slow and sustainable, they will explore and document their travels throughout the world to inspire you to get out and find you adventure. We met them.

Tell us about your Venture Lives project.

Venture Lives is a project we dreamt up in 2013 after dating for a few months. We would spend our weekends exploring the Wallowa mountains of Oregon, summitting mountains such as Mt. St. Helens and Mt. Adams, mountain biking, or going on our own excursions in the outdoors. While spending time at Ice Lake (one of our favorite spots in the Wallowas) we wondered how we could create a full-time lifestyle that would allow us to enjoy our love of the outdoors. 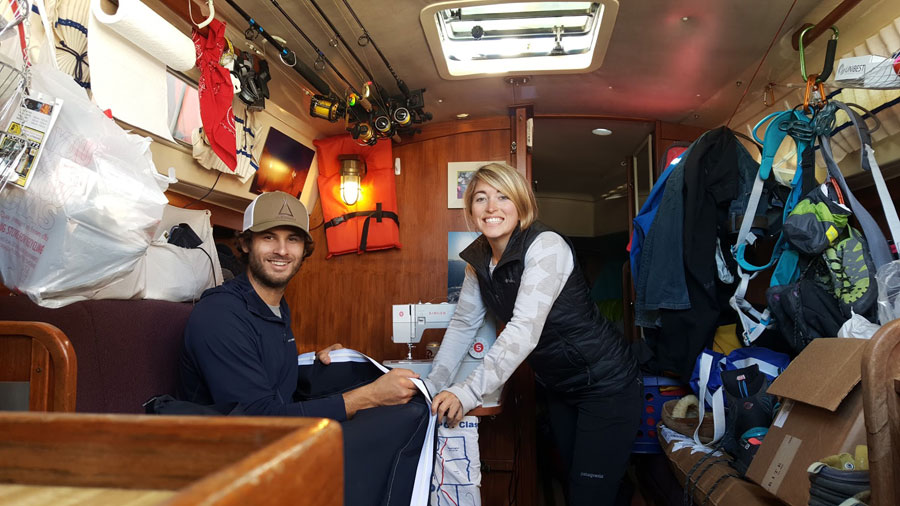 That night, these thoughts were just a dream as we stared at the starry sky. Less than a week after that moment, Rob listened to a speaker, Mark Schrader, talk about their voyage sailing around the Americas promoting ocean clean up.
This peaked our interest toward sailing. We had never even considered it before. 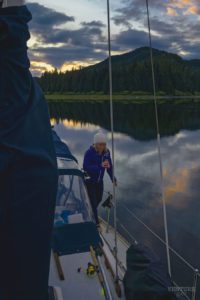 We had thought of van life, but sailboat life? Now that seemed even better! We spent more time learning about different types of sailboats, sailing fundamentals, and watching shows like Delos and More Hands on Deck. Our enthusiasm was peaked and we were going to make it happen.

After Megan hiked the Pacific Crest Trail in 2014, she moved to Juneau, Alaska and found a job next to a harbor. Rob was able to join her 5 months later. We were surprised to find a boat we liked at that very harbor.  We thought we’d have to bring a boat up from Seattle being that most boats in Juneau have a lot of rot. Juneau is in the middle of the Tongass National Rain Forest, making it hard for owners to manage moisture properly.

Which kind of boat is Turning Point (by the way, what a beautiful name!)?

In April of 2015, Turning Point, a 1979 Cal 31 became ours. As the 3rd owners of our prize possession, we were hammered with joy. We moved out of our apartment and started living in our floating home. At this point, we had never sailed before. We had done a lot of research, and now it was time to put it into action. 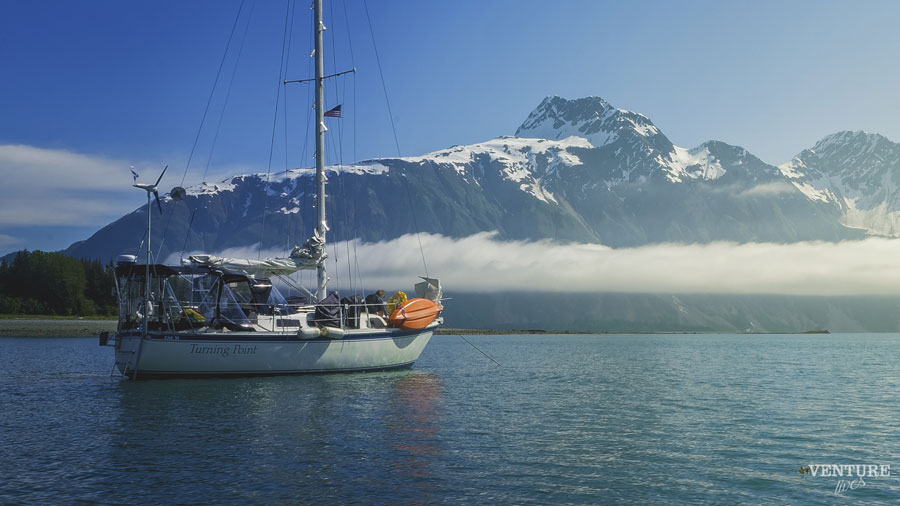 Along with learning how to sail, we decided to start making YouTube videos. Since Rob is a musician, he was writing his own songs for the films. You can hear these in some of the first videos, but he soon concluded that he wanted to focus on the art of film-making. Learning how to sail, learning electrical and diesel mechanic skills, keeping ourselves warm, creating videos, working at our full time jobs, and paying down our student loans, made it very hard to write songs and go out on our adventures. Just not enough hours in the day! Nonetheless, we were enjoying ourselves and knew that we were working towards our daily dream.

Earlier that year we came up with the name Venture Lives because we like the play on words. Venture lives in all of us. Isn’t this true? Sailing is only the beginning to a story filled with adventure. Harnessing the wind in our sails is only the beginning. With many great adventures comes knowledge that you can’t learn in any classroom. We love where a sailboat can take us and the many other activities we can do in conjunction. 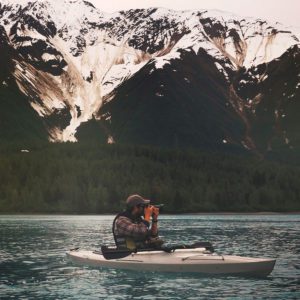 What are your future plans?

Venture Lives, LLC is going to be an ever-growing ever-changing company. In the grand scheme of things, we’ve only just began. Our ultimate goal would be to grow a film series that inspires others to not only enjoy the outdoors, but learn the secrets of its intimacy. We believe the more you learn from nature, the more likely you are going to want to protect it for future generations. In February of 2016, we became Venture Lives, LLC.

This spring (2017) we are sailing south through the Inside Passage of Alaska. We hope to spend a few months travelling, exploring, and filming our experiences as we go. Our goal is to create an educational and cinematic video series about the best anchorages within the Inside Passage.

The videos will encompass informative details of the anchorage, activities in the area, outdoor sports and fishing tips, history, cinematic areal video, wildlife, etc. We think a video series such as this could be a huge hit to the many people who want to come visit the last frontier in their own cruising boat. We will have a pilot episode of Baranof Hot Springs available early next year (2017). 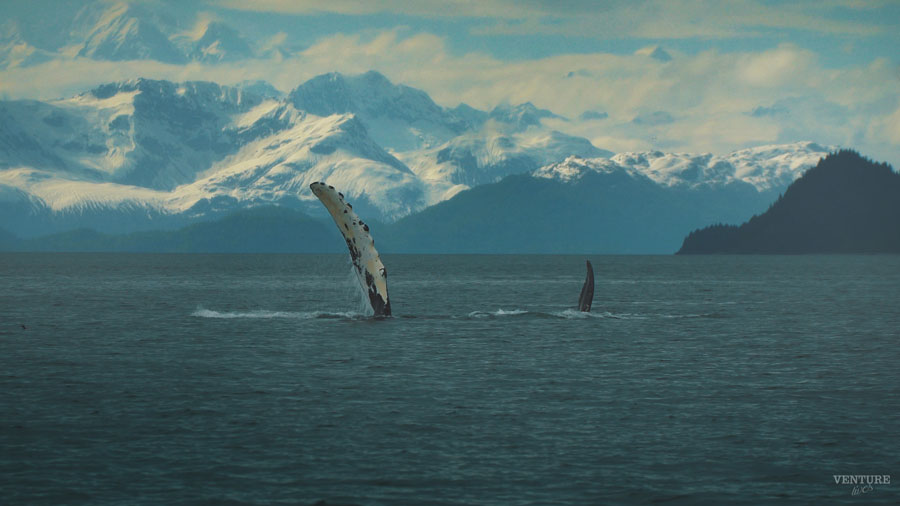 We are also filming and writing a storyline about adventure. We hope to encompass many individuals and inspiring people we meet along the way for this film. We hope to have it available for film festivals and for purchase online. We don’t have a completed timeline, as we are still in the writing and filming stage.

After our expedition south, we will winter in either Seattle, Portland, or on the Columbia River. We plan to catch up with family and friends before we start sailing south to warmer seas in 2018.

Ehm, we saw a video with a special wedding proposal…

Spring of 2016, we sailed to Glacier Bay, AK. About halfway through our trip as we were sailing south through the John Muir Inlet, Rob surprised Megan by asking her to marry him. We found a block of glacier ice from the Muir Glacier and Megan wanted to make a toast to John Muir. Fireball and Glacier Ice is always amazing! After the toast, Rob got down on one knee and Megan started laughing. There was too much excitement that she could barely say yes. As for a wedding date… well, that is still up in the air.

Our classic question: what does sailing mean for you?

Sailing encompasses so many meanings for us. It means adventure and new beginnings. It means a source of clean energy. It means learning how to live sustainably. It means a utopia kind of dream-world with no borders.  It means teaching you more lessons about nature than you’ve ever dreamed. 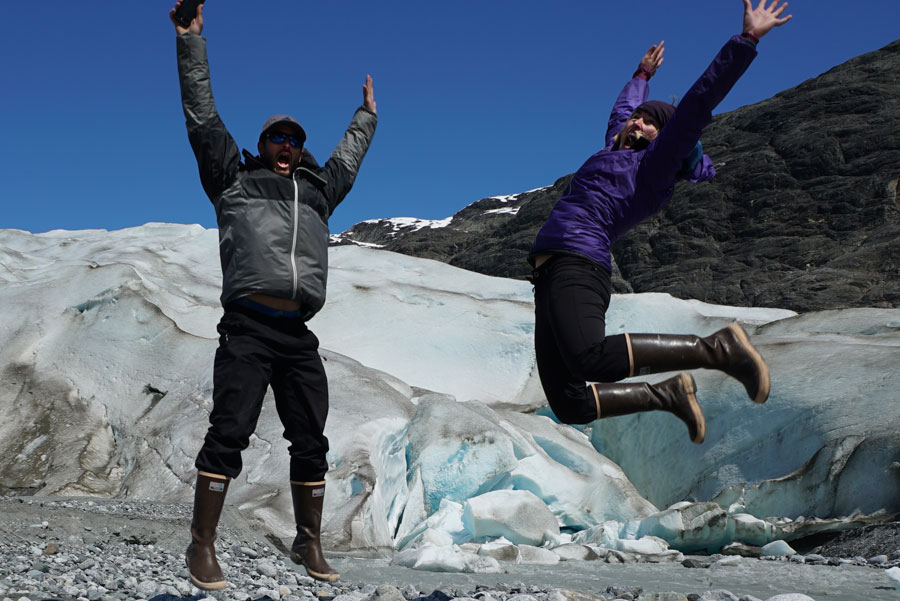 It means bringing people together. It means hope. It means embracing every moment. Because… where else are you going to go when traveling at 4 knots in the middle of nowhere? 🙂