The Volvo Ocean Race today unveiled a series of radical initiatives that will create the toughest all-round test in professional sailing and strengthen the appeal of the 44-year-old round-the-world race to pro sailors, team owners and their sponsors, race partners, host cities and fans.

While the final preparations are being made for the 2017-18 edition, starting 22 October, race organisers used a live event at the Volvo Museum in Gothenburg, the home of the race’s owners and title sponsors, to present a bold vision for the next decade and beyond. 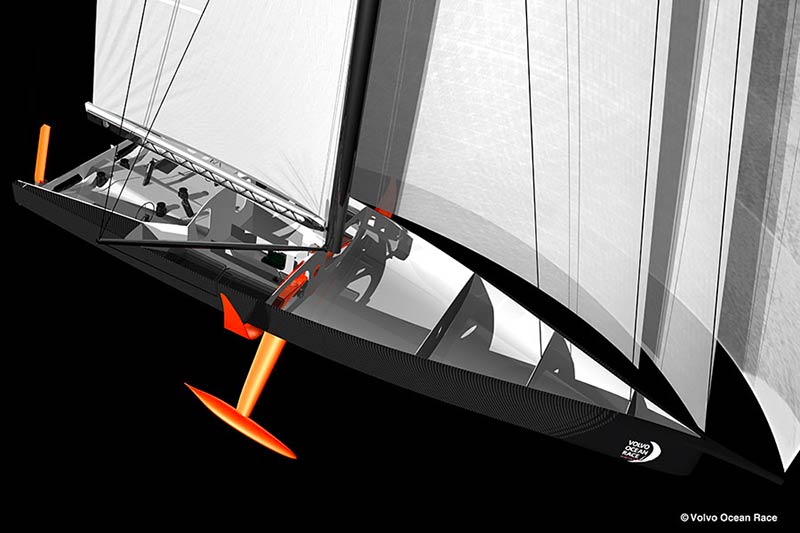 Highlights include the choice of a new 60-foot (18.29 metre) foil-assisted One Design ocean racing monohull, designed by France’s Guillaume Verdier, plus the introduction of a challenging 32-50 foot (10-15m) One Design ‘flying’ catamaran for In-Port Races, for which a new design and build tender process was launched today.

The offshore legs will remain the key to winning the Volvo Ocean Race, but the inshore racing will count more than the current situation, where it acts only as a tiebreaker. That means winning the race in future will demand expertise in both monohull racing offshore and multihull racing in the In-Port Series, as both platforms will be raced by essentially the same crew.

“Three hulls, but not what you might have imagined,” said Volvo Ocean Race CEO Mark Turner, revealing the choice of the next generation One Design boats, and referencing the difficult decision of whether to opt for a monohull or multihull design for the ocean legs, a subject that has been passionately debated by Volvo Ocean Race fans.

Initial builds will be 8 of each mono and multihull, and will be made available to teams on a lease basis, thereby removing the asset purchase barrier that often prevents teams start-up, with sponsors involved in the upcoming 2017-18 edition getting first option. The first of the new boats will be completed by January 2019, with the whole fleet ready by the middle of that year.

Persico Marine in Bergamo, Italy will lead the construction of the new monohull and the race’s own team of boat builders and experts at The Boatyard will complete the final fit-out, at a location to be confirmed as part of the Host City Tender process.

While it will be strictly One Design, there will be a lot to play with and learn on these new machines – plenty of scope for ‘tinkerability’ by the teams in terms of the way the boat is set up to race. Possible evolutions in between editions will be built in as far as possible to the concept from the start.

“The new boats will be delivered on a lease basis, and along with the growing package of benefits provided centrally by the race, we expect budgets to be at a similar level today,” explained Race CEO Mark Turner.

Those team budgets are at an average of 10-12m euros spread over two years, including several million normally attributable to activation costs.

Verdier, who is currently finalising plans for the next generation boat alongside his team of designers, said: “I’m extremely excited to be trusted with the task of delivering the next generation of Volvo Ocean Race boat. Volvo Ocean Race sailors have a reputation as relentless athletes who push extremely hard and the future boat design reflects that”.

“For that reason, it’s important to retain a certain level of safety in the design, which is especially key due to the places the fleet races through, such as the Southern Ocean“.

“With that in mind, it’s a huge challenge to design a machine that is both extraordinary to sail, but also safe at the same time.”

Crew numbers will be between 5 and 7, plus the OnBoard Reporter, and rules will continue to include incentives for mixed male-female crews and youth sailors.

Arcona 415 Unveiled: The Sailing Yacht With Electric Propulsion As Standard

Arcona 415 Unveiled: The Sailing Yacht With Electric Propulsion As Standard