In a previous life, Scott and Kim called themselves an engineer and an advertising rep. Since 2005, however, they’ve been fleeing corporate oppression and pondering the meaning of escapism. They left everything behind to head out on a sailing adventure in search of a more connected and sustainable way of life. This is their story.

You sailed over 25,000 miles. How did your adventure start?

Our adventure started with lots of fear and anxiety. For a long time we had dreams of escaping the rat race, but in 2005, another crash was looming in Detroit. Consumed by the heavy burden of paying off a thirty year mortgage, we really wondered if all that we were putting into it would one day blossom into fortune or would instead become an ever-widening hole that would swallow us up.

So we quit our jobs as a mechanical engineer and an advertising rep, sold the house and most of the junk it was stuffed with and moved in with Kim’s parents. A couple months after that, we found ourselves sweating in a dusty Florida boatyard.

From early on, we had this idea that we could stretch our adventure a little further on our tight budget if we started out with a fixer-upper. It’s an idea that probably spawned from watching too many home improvement shows. More than just needing repairs, the boat that we settled on two months after selling our house was an unfinished project that needed serious attention.

After flying from Michigan to southern Florida to see the boat for the first time, we found out that the broker had lied about the boats condition. The engine didn’t run, the sails were torn, and the rigging was coming apart. The boat had large dents on both sides of the hull where it had undergone a confrontation with a reef during a tropical storm, and suffered serious damage. Thanks to its heavy-duty aluminum construction it wasn’t holed, but the damage was much more extensive than the broker had led us to believe.

Almost twelve years later, we’re still paying for our decision to take on such a serious project. More than just a ticket to paradise, the boat we chose was a huge commitment. It has, however, forced us to carefully consider the value of our experiences. All of our hard work has certainly launched us into a much more interesting life. It has also provided us with a serious outlet for our creative needs. The rewards and hardships of the choices we have made is what we intend to explore in our new video series – Sailing Tranquility Bay.

Please tell us something about your sailboat.

Our sailboat is a thirty-eight foot aluminum Reve d’ Antilles designed by Finot and built in 1986 by Maurice. Beyond all of the damage, it has been an unfinished project since it first floated. We are the third owners attempting to finish the job.

Since we’ve had the boat, we’ve added a windvane, self-tailing winches, and a lot of cabinetry – along with all of our initial repairs. The boat we started with had eight berths, and not much more. We are currently undertaking a major reconfiguration of the interior so that we can have an indoor shower/wet zone and some more functional storage space.

Our boat sails marvelously and is equipped well for sailing in the tropics, but over the past decade, we’ve often been pushed to our limits by its campy set-up. On more than a few occasions, we’ve had a good laugh when we’ve heard people panic on the VHF because their windlass is broken and they can’t get their anchor up. For us, lifting the three-eighths chain and sixty pound anchor hand over hand has always been part of normal operating procedure. We now have a shiny new power windlass awaiting installation. 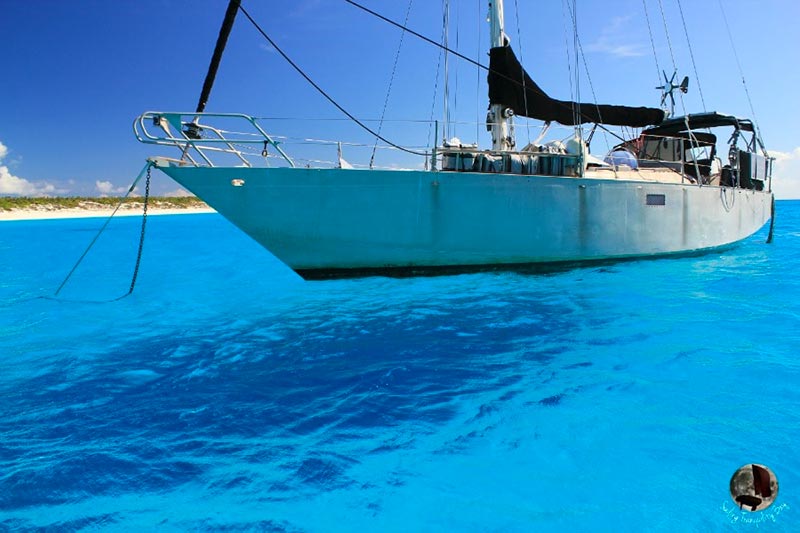 We’ve enjoyed a summer in Maine and two summers in NYC, and with autumn weather riding on our heels, we’ve found ourselves struggling with very basic things – like hygiene – when the weather turns cold. Taking a shower in the cockpit is not fun when there’s frost on the deck. That was OK a decade ago, but now we’re ready for a little more comfort.

What’s the “trick” to living so long in a boat with your partner?

Scott: I don’t think there are any tricks – we just try to focus on love and patience instead of fear and hostility. Referring to the small space that we share almost 24/7, people frequently tell us, “we could never do that. We’d kill each other.” While we certainly do have a special kind of relationship, I think they often wonder what it is that we have that they don’t.

In this part of our lives, our relationship is reinforced by the fact that we both would rather deal with each others constant presence than take on the complications of a mortgage, ugly commutes, and a lawn to mow. If we ever do manage to put down roots again, I don’t think that it would be due to a desire for more personal space – but it would be nice.

Kim:  When we first moved aboard, our neighbors in the boatyard told us never to crawl into the v-berth angry. It’s important to be able to work things out and forgive each other quickly because sleeping in the dinghy is extremely uncomfortable. We were married for seven years before we started on this adventure, but with our work schedules, we were apart for ten hours of the day. Our time together has essentially doubled. It’s sometimes easy for our egos to get hung up on the little things, but when the weather gets ugly or we’re in a tough situation, we always know that we have each other to rely on.

What are the five most beautiful places where to sail at least one time?

We’ve always felt that that is a funny question, but also one of the most common questions we’re asked. Our definition of beauty is something that changes daily. The time we spent several weeks exploring the reefs off of the coast of Nicaragua and Honduras definitely topped the charts. In contrast to the horrors spilling out of the Deep Water Horizon just to the north of us at the time, we experienced some of the most beautiful and prolific coral reefs we’ve ever seen in the ocean. Everywhere we looked, we were surrounded by colorful life.

Our favorite stop there was at a place called the Quita Sueño Bank. With our sometimes inadequate Spanish skills, we were charmed to think that that translated literally to the “The Lost Dream Bank.” But we later learned that quita sueño means to lose sleep. The reef is a hundred miles from nowhere. A dangerous current that flows over the top of the bank has sucked many ships to their graves along its jagged windward edge. Based on wicked stories we heard further along in our travels, we now look back at our experiences there and are thankful that we didn’t cross paths with some of the other dangers that we learned of – the lawless smugglers and dangerous outlaws that traverse them.

Despite what a lot of people say, there still are unspoiled places in the Caribbean. The coast and the islands off of Venezuela were incredibly beautiful. The terrain varied from rolling red deserts to swampy jungles to jeweled reefs. We liked it so much that we spent nearly a year there, but we definitely wouldn’t recommend traveling there right now.

To flip this question on its head, we’ve enjoyed sailing past the skyline of NYC several times. On the Hudson or on the East River, at night or in the daytime, NYC has always been a reoccurring land of wonder for us. While the air quality and noise pollution aren’t so spectacular, having the chance to dwell someplace that you may have been too busy to appreciate in a previous life is something that we’ve always rated highly. A lively city can be as fascinating as a wild reef when you’re exploring it on your own terms.

Beyond these, it’s really hard to narrow our favorites down to five places. There have been a lot of places in between that we’ve found beautiful for their own special reasons. We could certainly fill pages about them. It’s a tough question. To any readers wondering more about our specific ideas here or there or anywhere, toss us a few coins on Patreon and we might even fish you out some coordinates.

What are your future plans?

Our biggest ambition right now is to finish putting our boat back together while exploring the possibilities of free expression on YouTube. It’s a whole new world for us, and a whole new opportunity to interface with the world we left behind. After we wrap up our latest boat installations, we plan to continue our broadcasts from further afield.

We’re envisioning a decompression stop in the Bahamas, where we’d like to bring viewers along to some places that have affected us deeply. After that, we’d like to travel to a place we’ve always had our hearts set on. We’d like to travel to northern latitudes and the edge of the ice-field, where our aim is to take our own look at what we’ve been hearing about for the last couple decades. It’s something we’ve always intended to do, but has been hindered by our need to further condition our boat for a comfortable voyage.

What does sailing mean for you?

To us, the word sailing, like the word cruising, encapsulates a whole lot more than just the technical operation and challenges of navigation. Our sailboat is also our home. The experiences that we’ve found through sailing, are so much more than the process of traveling from point A to B at incredibly slow speeds. Sailing is a way to explore places that most people will never even have the option of seeing.

There is certainly plenty of joy and romance that goes along with pulling on the strings and facing technical challenges. Overcoming adverse conditions can also feel very rewarding. But for us, the idea of sailing/cruising is more about leaving behind everything that you’ve grown accustomed to and heading out – across some patch of the Sail Universe – into the unknown. Sailing the boat is rewarding in itself, but when you get the chance to transport yourself and your home into a whole new world, you have yet another chance to reinvent yourself.