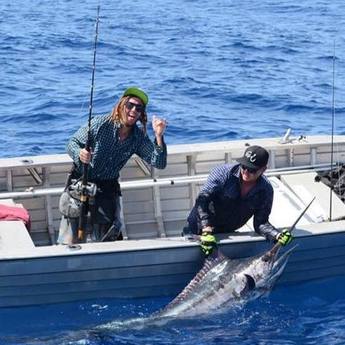 Facebook is handy sometimes in reminding you about those hell times you had in the past. I have not told this story for a while and it was slowly turning into a lovely memory that I no longer shared. Then facebook pops up with this picture…

All the memories came flooding back haha. SO here is a story that happened two years ago during our time living in Exmouth, WA.

It was one of those days on the west, a rare day like this for that time of the year. Where the wind was no where to be seen and the sun was shining. The sun is always shining in the west though, but the fact there was no wind is an occurance that is quite uncommon that time of the year as the trade winds are constantly blowing.

We were living in our bus froth at the time at the lighthouse caravan park. The young salty Bailey showed up bright and early to take us out in his 4.5m tinny. We had previously planned to head for a dive and a little fish on the outside of gnarloo reef. Hopefully catching a macky or two. My eyes lit up when he delivered the question of
“Wanna catch a Marlin…” Silly question sir.