It was at 21:14:45 UTC on Sunday 20th November that Francis Joyon and his crew crossed the start line for the Jules Verne Trophy, the outright round the world sailing record, on IDEC SPORT.

“All we can see is the Créac’h Lighthouse. It’s pitch black. But we have the impression that this is the start of something big,”commented Francis Joyon, the skipper of IDEC SPORT, who was in a hurry not to avoid the weather opportunity ahead of the bows of the 31m long trimaran.

Francis Joyon, Bernard Stamm, Alex Pella, Gwénolé Gahinet, Clément Surtel and Boris Herrmann left the harbour in Brest shortly before 1845 UTC. They had intended to wait a while in the light airs at the centre of the low before making the most of some powerful and favourable winds generated to the west of this system. The weather however meant they did not have to remain patient for long, as they ended up crossing the line much earlier than scheduled.

This commando force of exceptional sailors set off on Sunday to break the record, propelled along at 24 knots after a change of headsail over the line between the Le Créac’h lighthouse on Ushant and The Lizard at the SW tip of Britain.

The situation is very unusual for a record attempt and this is a first for Francis Joyon. The voyage is beginning with light airs, but northerly gales are on their way to the tip of Brittany. This is the system that Francis and his router, Marcel van Triest have been looking at. The skipper hopes to pick up these winds later this Monday morning to speed across the Bay of Biscay and get to the trade winds off Portugal and the Canaries without hitch.

The first few hours were more of a slow trot as they make their way across a ridge, where there are light winds and calms. So the maxi trimaran is practically stopped waiting for the big blow to head towards the SW. As usual, the sea state will determine how fast they can go. The storms which swept across Western France this weekend led to a heavy swell, but this has eased and is in the same direction as the wind, so it should not be too much of a problem for the multihull. 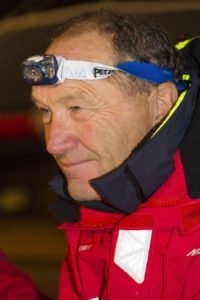 The crew of IDEC SPORT

After making an initial attempt last year and getting ever so close to the record, the crew of IDEC SPORT has set off in the same configuration as last time. There is no point in changing such a fantastic combination. To smash the record set by Loïck Peyron and his crew of thirteen dating back to January 2012 and see his name in the record books for the eighth time, Francis Joyon along with his crew of five must return to cross this same line between Brittany and Cornwall by 10:56:38 UTC on 5th January 2017.