Next week marks a year since we sailed Carina into the Río Guadiana. I wasn’t sure what to expect as we turned north from the Atlantic coast of southern Spain and into the river, but it wasn’t this. Live aboards we met on Ilha da Culatra in the autumn of 2014 sang the praises of the river and told us we had to check it out. We sailed past on our way into the Mediterranean, but sailing west back out of the Med seven months later, we thought we’d better go see what all the fuss was about.

I had heard of the strong floods that visit the river from time to time, and I knew there were two marinas not far from the river mouth – Ayamonte in Spain and Vila Real de Santo Antonio in Portugal. And I knew the river was navigable some way up. Beyond that I knew nothing. I had seen no photographs or charts, read no pilot books or websites, and had only vague recollections of conversations in the bar in Ilha da Culatra months before.

Sailing Nandji Ep 288 – GETTING SMASHED by a STORM! Losing our Steering at SEA!

5 Tips For Anchoring Your Sailboat

Sailing Nandji Ep 288 – GETTING SMASHED by a STORM! Losing our Steering at SEA!

5 Tips For Anchoring Your Sailboat 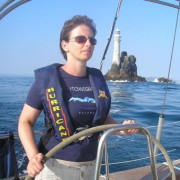 I’m Martina and my boat is Carina of Devon. I live aboard Carina with my husband and our two daughters. This blog is about our adventures aboard our boat, our observations of life, my (and sometimes Julian’s) thoughts about culture, nature, home schooling, parenting and life in general.
By Martina Tyrrell
All (6)
Back to top button
Close