The research schooner Tara will leave her home port of Lorient on May 28th 2016 for a new expedition in the Asian Pacific. The boat will sail nearly 100,000 km around the Pacific Ocean for more than two years. The interdisciplinary team of scientists aboard, coordinated by the CNRS and the Scientific Centre of Monaco (CSM), will examine in a new way the biodiversity of coral reefs and their evolution in response to climate change and human activities. This adventure is sponsored by the CNRS, PSL, CEA, CSM and many other public and private partners.

Coral reefs cover less than 0.2% of the oceans’ surface, yet they include nearly 30% of known marine biodiversity. Their health is crucial to the diversity of species, and also for humanity. Studying this fragile and endangered ecosystem is a priority since a large number of reefs have been disappearing in recent years.

From east to west and from south to north, Tara will criss-cross the Pacific Ocean to explore the hidden diversity of coral reefs and gain a better understanding of their capacity to adapt to climate change. From the Panama Canal to the archipelago of Japan (2016-2017), from New Zealand to China (2017-2018), the schooner will traverse 11 time zones of the world’s largest ocean, and visit the most remote islands and reefs. 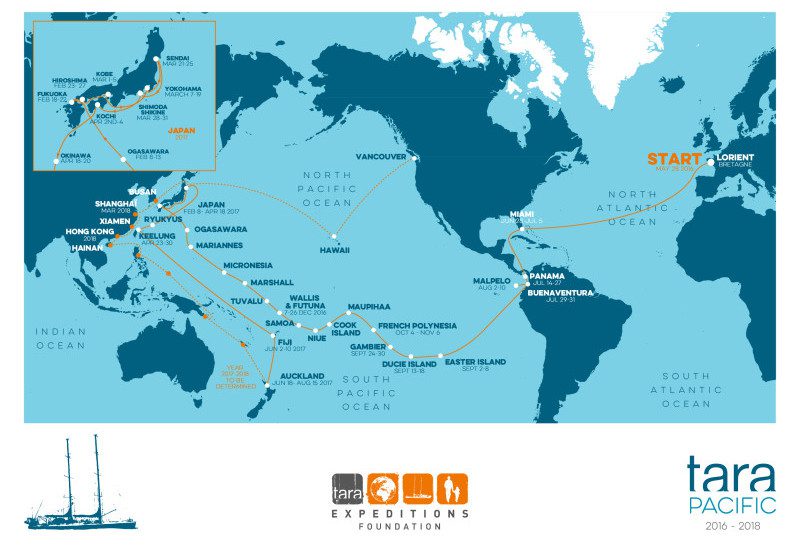 A novel approach to reef biodiversity
This expedition is unique in that it will cover such a huge geographical area – the Pacific Ocean – where over 40% of the world’s coral reefs are concentrated. A study on this scale has never before been accomplished.

According to Serge Planes, CNRS researcher and scientific director of the expedition, “Tara Pacific will explore each reef ‘s hidden biodiversity – genomic, genetic, viral and bacterial – in order to compare it with the biodiversity of the surrounding body of water. Our goal is to get a real idea of the overall diversity of a coral colony. ”

The Tara Pacific expedition will traverse a very wide gradient of biodiversity, culminating in the “Coral Triangle” of Southeast Asia. During the expedition, 40 different archipelagos will be studied, each in exactly the same way, so as to detect variations in the presence of 3 reef species: 2 corals and 1 small invertebrate in the hydroid family. Adopting a comparative and interdisciplinary approach, scientists will review the recent past of coral colonies to observe the contemporary evolution of the reefs, and to envisage the future, especially through computer simulations.   Besides the state of health of each reef and its biodiversity at different levels, the scientific team will focus on the capacities of resistance, adaptation and resilience of the reef ecosystems. A last aspect of our study will focus on the potential applications of coral biology to medical research.