The trash vortex is an area the size of Texas in the North Pacific in which an estimated six kilos of plastic for every kilo of natural plankton, along with other slow degrading garbage, swirls slowly around like a clock, choked with dead fish, marine mammals, and birds who get snared. Some plastics in the gyre will not break down in the lifetimes of the grandchildren of the people who threw them away. Maybe some solutions are growing…

You don’t really understand? Click on the infographic and read! 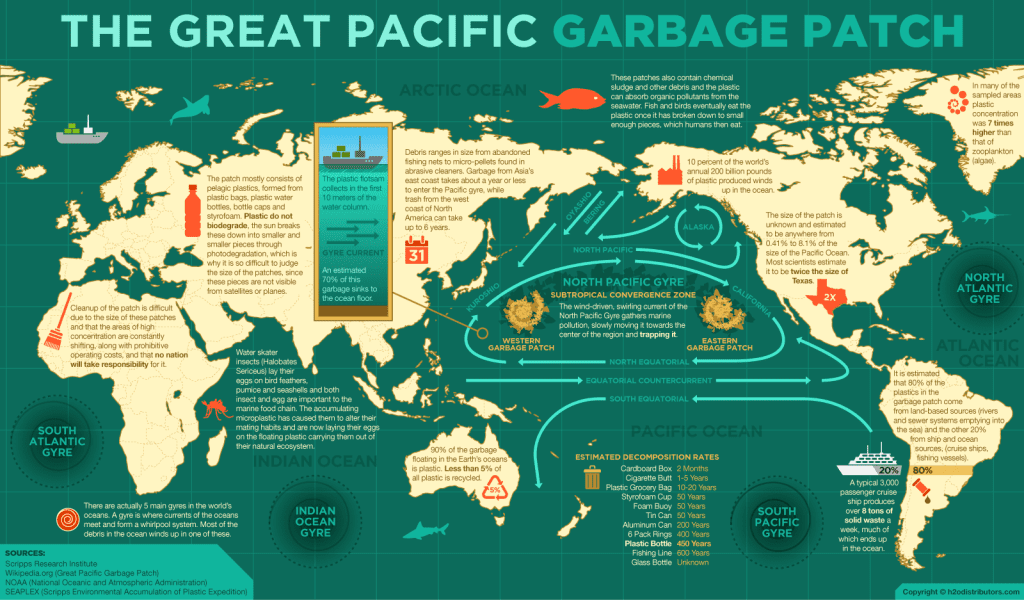 Great Pacific Garbage Patch 2017The patch is created in the gyre of the North Pacific Subtropical Convergence Zone.

The Great Pacific garbage patch (also Pacific trash vortex) is a garbage patch, a gyre of marine debris particles, in the central North Pacific Ocean. It is located roughly from 135°W to 155°W and 35°N to 42°N. The collection of plastic and floating trash originates from the Pacific Rim, including countries in Asia, North America, and South America. The gyre is divided into two areas, the “Eastern Garbage Patch” from California to Hawaii, and the “Western Garbage Patch” extending from Hawaii to Japan.

Despite the common public perception of the patch existing as giant islands of floating garbage, its low density (4 particles per cubic metre (3.1/cu yd)) prevents detection by satellite imagery, or even by casual boaters or divers in the area. This is because the patch is a widely dispersed area consisting primarily of suspended “fingernail-sized or smaller”—often microscopic—particles in the upper water column known as microplastics. Researchers from The Ocean Cleanup project claimed that the patch covers 1.6 million square kilometres (620 thousand square miles). Some of the plastic in the patch is over 50 years old, and includes items (and fragments of items) such as “plastic lighters, toothbrushes, water bottles, pens, baby bottles, cell phones, plastic bags, and nurdles.” The small fibers of wood pulp found throughout the patch are “believed to originate from the thousands of tons of toilet paper flushed into the oceans daily.”

Planning for the Tides: When to Set Sail and When to Anchor

Planning for the Tides: When to Set Sail and When to Anchor