Pollution is the presence or introduction of impurities into the natural environment that cause unfavorable changes. Pollution can either be in the form of a chemical substance or chemical energy  like heat,  light or noise. Pollutants are the components of pollution, and they can either be Impurities that occurs naturally or energies or alien substances. Pollution issues increases on a rapid rate as population growth begin to exceed the ability of the environment to handle their waste problem.

The source that is primarily used by humans, animals as well as plants is sea water. So when sea is polluted, it will have effect on the organisms in the sea and the humans  eating the organisms. And this will bring into existence lots of serious diseases to living beings.

This will have an adverse effect on the global ecosystem. In some parts of the world, seas are so much polluted that they have put the ecosystems in danger. Un-polluted oceans can bring balance to the ecosystem of the world.

Continuous efforts have been made to increase the awareness of the problems that come with sea pollution and  steps have been taken to clean up the polluted sea, so as to make it usable again. Part of those steps is the Seabin Project.

The Seabin Project, an idea we love

Unfortunately, every year several tons of plastic ends up in the ocean creating “sea of plastic,” which is an aggregation of dirts floating in sea water stretching many miles. But the Australian-based Seabin Project is effectively trying to stop the plastic bags, styrofoam water bottles, and other garbage floating on the water before they end up in the ocean, which is the largest water body. They make use of a floating garbage can that is submerged in the water at yacht clubs,  floating docks, marinas and ports.

In windless conditions, the Seabin can brings in garbage from close to 5 to 15 feet away (roughly 2 to 6 meters), but it does not catch garbage that isn’t floating in its way. So there is need for them to be placed at strategic places in  harbors and marinas to maximize garbage collection.

Also, it can’t take in big pieces of garbage like a large piece of cardboard floating on the water, it has to be picked out by hand. It was discovered that the common item the Seabins are catching are the cigarette butts, the other item is plastic particles, and the third one is food wrappers, and sometimes oil, though the chemical substances in the sea can’t be evacuated by the Seabin.

The Seabin Project is going a long way to bring the ecosystem back to it’s normal state and it is the best solution yet discovered.

How does Seabin Project work? 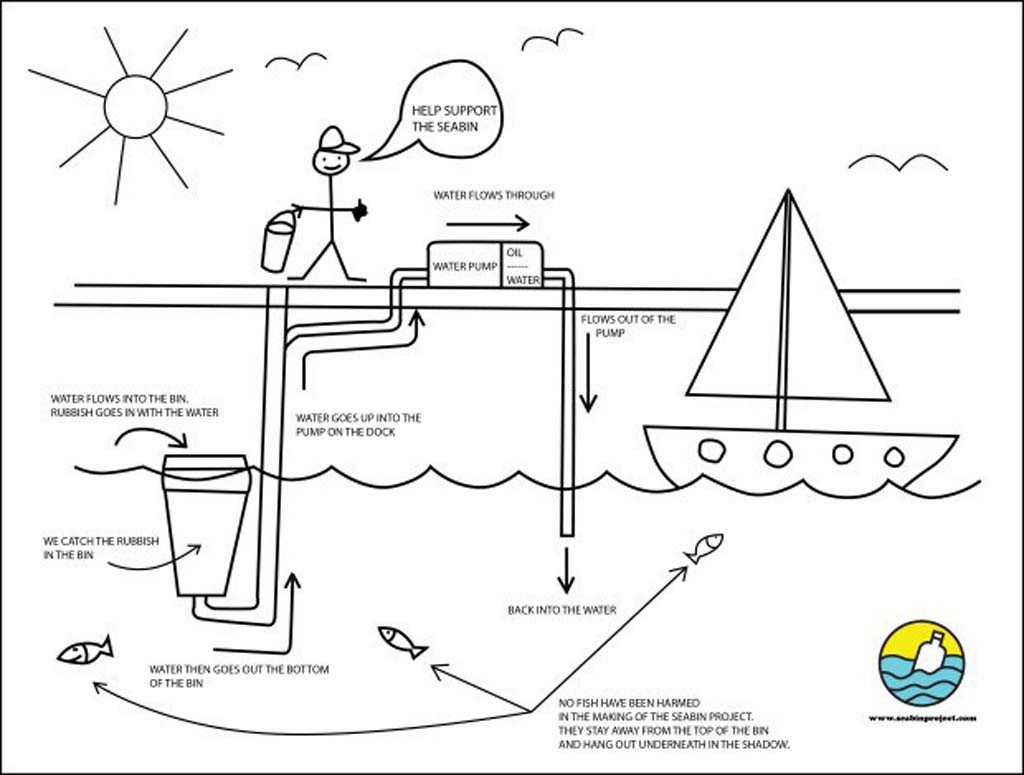 The water then flows through the pump where we have the option of installing an oil/water separator and clean water then flows back into the ocean. This process is constant, operating 24 hours a day, 7 days a week, 365 days a year.