On standby since 22 October, François Gabart cast off today, Saturday 4 November, at 10.05 (French time, UTC+1) to take on the challenge of the single-handed round the world record.

The MACIF trimaran skipper left his home port of Port-la-Forêt, on Friday evening, to make his way to the round the world starting line located between the Créac’h lighthouse, in Ouessant (Ushant), and the Lizard Point lighthouse in Cornwall, England, before setting sail in an 18-knot north-westerly.

To beat the record, held since 25 December 2016, by Thomas Coville in 49 days, 3 hours, 4 minutes and 28 seconds, François Gabart will need to cross the finishing line before 13.09 on 23 December (French time, UTC+1). In addition to working relentlessly to push his 30-metre trimaran as hard as he can, he will also need a sequence of favourable weather conditions, starting with the weather he will meet on the first run to the equator, which Thomas Coville crossed last year in 5 days, 17 hours, 11 minutes and 52 seconds. 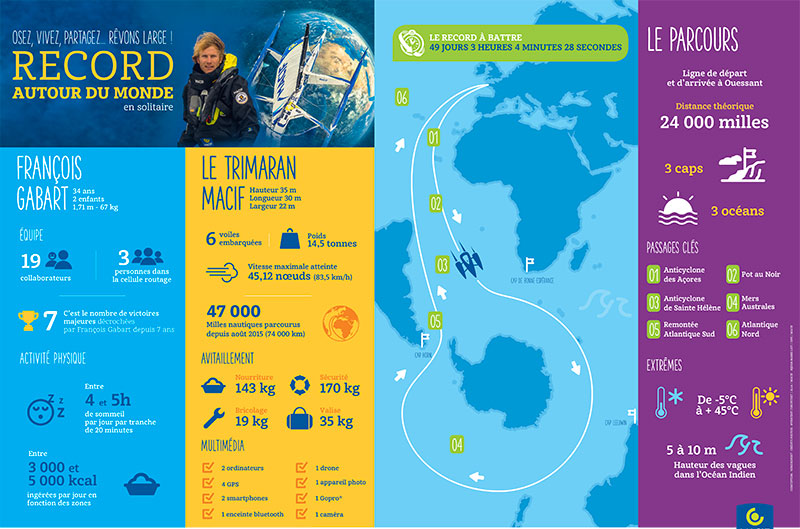 “We hope that this weather window will be the right one to pick up the trade wind and quickly head towards the South Atlantic. It’s a small window. I may not be the best window in the world, but there comes a time when you have to leave! We have a fair idea of what weather we will have until the equator, but not after that. This is also part of the record attempt. This is why we have chosen to leave now. We have to try and we’ll see near Brazil if the weather follows on as we would hope. The timing is really important, since this is a record that’s almost impossible to beat. Thomas [Coville] sailed wonderfully and the weather windows followed on from each other perfectly. So I will do my very best to get close to what he did. You really need to have a guiding star and a little success to have weather windows that follow on from each other well right until the end. I’m really impatient to sail around the world on this beautiful boat. It has taken nearly 2 years of work to get to this stage… now, it’s time to go!”