Francis Joyon added another line to his long list of successes, beating by 49 minutes his own North Atlantic solo record, set in June 2013 aboard his previous 29m trimaran, IDEC.

This week he achieved this latest success aboard the IDEC SPORT maxi trimaran, the same VPLP designed boat that last winter smashed the Jules Verne Trophy crewed round the world record. For his first solo Atlantic crossing aboard a boat initially designed for twelve sailors, he has improved on the time for the legendary crossing between New York and The Lizard.

He did this the Joyon way without any preparation beforehand, no stand-by period or sophisticated routing, just using his talent, determination and his ability at the age of 61 to push that bit harder when sailing solo aboard a multihull.

By crossing the longitude of The Lizard, which is the historic finish line for the North Atlantic record from Ambrose Light in New York at 0137 hrs UTC this morning, Francis Joyon has beaten his own record by 49 minutes.  The World Speed Sailing Record Council will be adding his time of 5 days, 2 hours and 7 minutes to the history books.

“I only just did it,” declared the sailor from Locmariaquer in Brittany after an exhausting night with a lot of manoeuvres and gybes to get to the southernmost tip of mainland Britain. 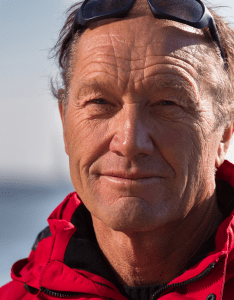 At the age of 61, Francis Joyon has pulled off another major physical and sporting achievement in a context, which is unprecedented for such a major record. “I set off from New York in a hurry,” he stressed. “I didn’t even have time to sort out the supplies. I just bought some eggs and bananas. As for the food on board, the lads ate it all during the crossing in The Bridge 2017.”