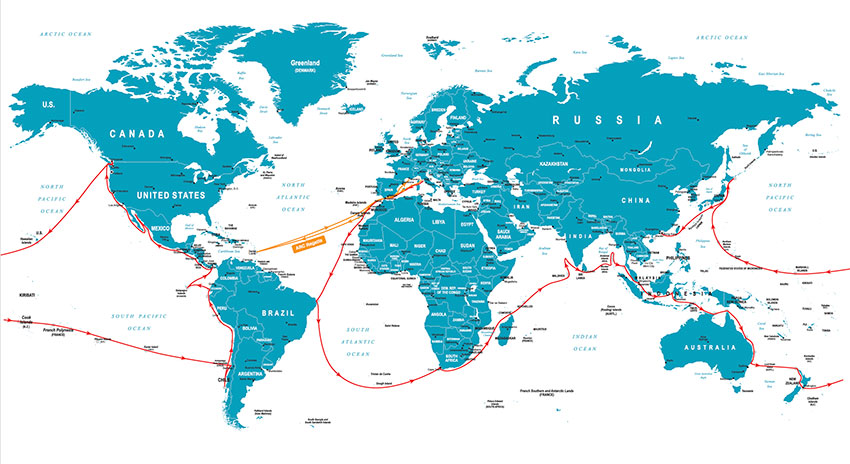 In December 2017, this trip will take the crew to the island of Phuket in Thailand, where they will take part in the Phuket King’s Cup Regatta. APSARAS will then sail on across the Pacific to the Oceania area before heading towards coast of the Americas. From there her route will take her south and then northwards, doubling back across the Pacific to finally arrive at her destination – Hong Kong.

What happened until today

On 13th November 2016, APSARAS set sail from Porto Santo Stefano, destination Gran Canaria. The weather was good with a wind speed of around 15 knots. During this first voyage, the crew made the most of the good weather conditions to dabble in a little miracle fishing.

Close to the Balearic Islands, the weather forecast warned of gales approaching from the north west at speeds of 50 knots. For 3 days, APSARAS sailed on safely with 3 reefs in the main and a furled jib in 40 to 45 knot winds and gusts approaching 50 knots. She passed Gibraltar, leaving the Mediterranean behind with a good following wind that accompanied APSARAS across the Atlantic Ocean until she arrived at Gran Canaria 5 days later. 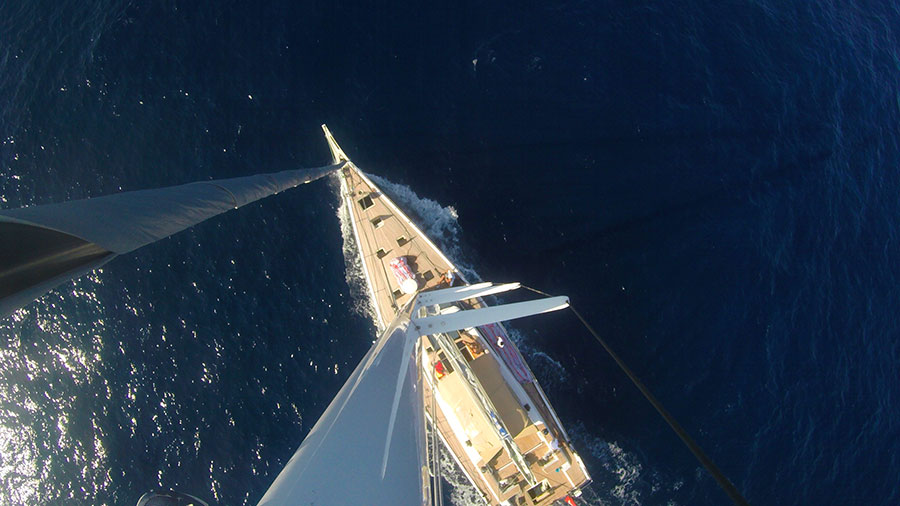 The yacht’s owner and his guests then arrived and she set sail again on the 25th November. APSARAS now had a full complement aboard with 12 people aboard, including the 8 crew. At the start of the crossing, the crew were divided into 3, 2 man watches of 3 hours duration. From Gran Canaria, a course was set for Cape Verde, crossing the Atlantic in a north to south direction. In Cape Verde, she called at the island of Praia for a 10 hour fuel stop.

APSARAS then set sail again towards Brazil with the code zero hoisted. Close reaching with winds of around 15 knots, she covered 800 nautical miles in 3 days. It was a priority to remain constantly at the helm because of Saint Peter and Saint Paul Archipelago in the middle of the Atlantic Ocean. When the GPS showed 000 000 000, both crew and the guests were on deck to celebrate crossing the Equator.

When APSARAS arrived in Brazilian territorial waters, she anchored in the Bay of Dolphins in the Fernando de Noronha archipelago. The view was spectacular and there were hundreds of dolphins and unspoilt scenery, along with fabulous beaches and bays with deep green sea.

APSARAS and crew spent 5 days in the midst of nature, to organise stores of food, fuel and … enjoy a little relaxation before the longest crossing yet, that would take them to Cape Town. On 8 December, APSARAS raised anchor and enjoyed 4 days of fantastic windward sailing at speeds between 20 and 25 knots. From Brazil to Cape Town, a passage of 3,800 miles of ocean sailing, the crew had fun fishing for tuna and dorado.

APSARAS sailed as far as the 30th parallel south and then on to the 34th parallel towards Cape Town to avoid the high pressure area of Saint Helena, which would have slowed her down. She encountered breeze of between 40 and 45 knots sailing with 3 reefs in the main and staysail and achieving speeds of up to 25 knots. The last 4 fantastic days, took APSARAS on a close-hauled starboard tack to Cape Town.

“The yacht is spectacular, fantastic. She always behaves well. We managed to sail all the time, running the engine for only 30 hours on the stretch between the Canary Islands and Cape Verde. To date, APSARAS has covered 21,000 nautical miles. During our trip we faced all kinds of weather conditions, including some very tough situations. The yacht always performed very well: she’s very balanced, easy to handle and she always gave us a feeling of safety.” declared Skipper Fabio Beccatini on arrival in Cape Town on Christmas Eve.