While it is approaching the end of the great battle of Vendée Globe (the record edition!), the French designer Guillaume Verdier explains us how the Imoca changed since 2007.

In 2007, I was part of the K Challenge design team for the America’s Cup in Valencia. In collaboration with Bernard Nivelt, I designed hulls that were very wide at the bow and stern, with very steep sides. In parallel, we studied the compromises between the hull’s stiffness, the wetted surface and wave lengths. Powerful bows turned out to be efficient because they extend the wave created by the boat.

This was also when I started collaborating with the VPLP design office. We worked together on the design of Marc Guillemot’s Safran (currently Yann Elies’ Queguiner) and Kito de Pavant’s Groupe Bel (now Thomas Ruyant’s Souffle du Nord). 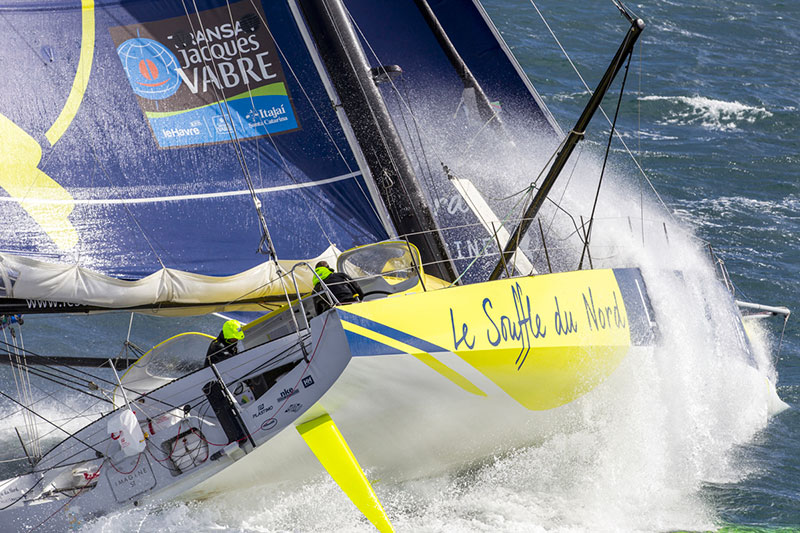 The designs we came up with broke away from previous IMOCA boats and had the following particularities:
– The chine is distinctive and spreads over the entire length of the hull, 5.50 m wide.
– There is less wetted surface than before. A first for 60 foot boats.
– The hull sides are also very vertical.
– Then, the bow volume is very pronounced, with straight water lines when heeling and no longer inversed like they used to be.

The keel is very far back and we put tilt on its axle, meaning we inclined the front of the axis towards the top, allowing the keel to work along the same line as the heeling hull.

Concerning the deck plan, we decided to centre weights and lower the centre of gravity. The mast is a classic one, with three spreaders (Groupe Bel chose a wing mast). It is also removed aft, favouring reaching and facilitating sail manoeuvres (reefing). Thus, the mainsail is very slender. Its structure is also rather original since it is very ramified (like leaves on a tree), enabling great resilience in the event of damage.

To test these innovations, we used increasingly sophisticated digital tools (Computational Fluid Dynamics software) helping us better apprehend compromises. We also tank tested them to predict performance. These boats turned out to be very powerful, although modestly sized. They behave well in the swell since they don’t nose dive into it. 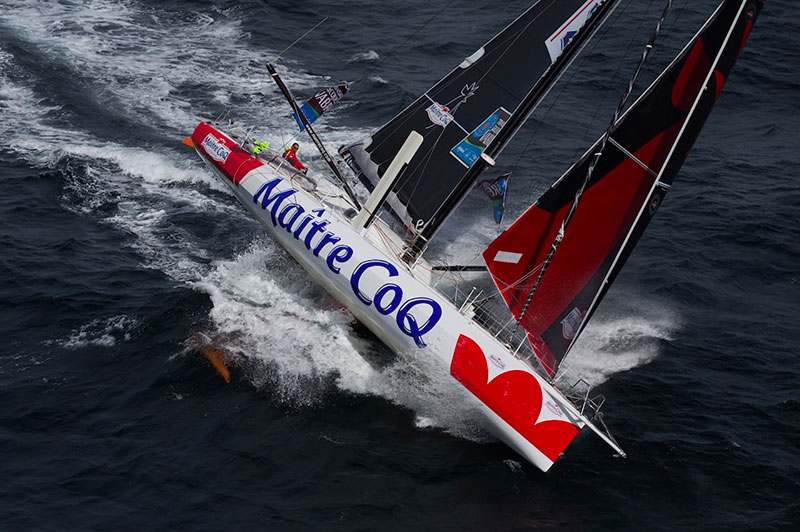 Our reference was the initial concept of Safran, which turned out to be very efficient. We wanted to push boundaries, drawing from sailors’ feedback. Making theory and practise come together.

For PRB, Vincent Riou wanted to simplify the boat. Every carbon ply was put into question, in order to always lighten the boat. In the end, after a mechanical slimming diet, we reached an unimaginable weight result. The hull is the same as Safran’s. The chine hull is also 5.50 m. The deck changed because Vincent Riou considered that it had to be adapted to his sailing methods. As for the wing mast, it has outriggers which spread out the staysails’ clews.

For Virbac-Paprec 3, we developed second generation hulls. The volume at the front was increased, to compensate the sails’ power. Once again, we relied on sophisticated scientific tools. We tank tested it in the Woolfson unit (in Southampton), which enabled us to ensure the boat’s marine quality.

We also did swell testing. We also used CFD software to understand where the resistance in various parts of the hull comes from. Thanks to these tools, we managed to design a boat with a stiff hull, that doesn’t plough when reaching. This was a major step forward, considerably optimising new generation 60 foot boats. The chine hull is 5.70 m. We opted for a very light and compact classic mast, developed by Southern Spars.

Banque Populaire and Macif are sisterships. In their design, the following elements are noteworthy: a powerful bilge hull, 5.70 m beam, a wing mast, a straight daggerboard, carbon keel for Banque Populaire and a steel one for Macif, and a deck the shape of a seagull’s wing. This was Michel Desjoyeaux’ idea, who saw a structural advantage, for dunnage and storage of sails in the centre. It was at his request that we created a complex network of tunnels under the deck.

For the 2016-2017 edition of the Vendée Globe, the class standards changed. The wing mast and one piece keel are imposed. VPLP and myself got in contact to create six new boats: Morgan Lagravière’s Safran II, Armel Le Cléach’s Banque Populaire, Sébastien Josse’s Gitana, Jean-Pierre Dick’s St Michel-Virbac, Alex Thomson’s Hugo Boss and the last to be launched was Pieter Heerema’s No Way Back. We looked for a way to optimise performance. This was where the foils came in. 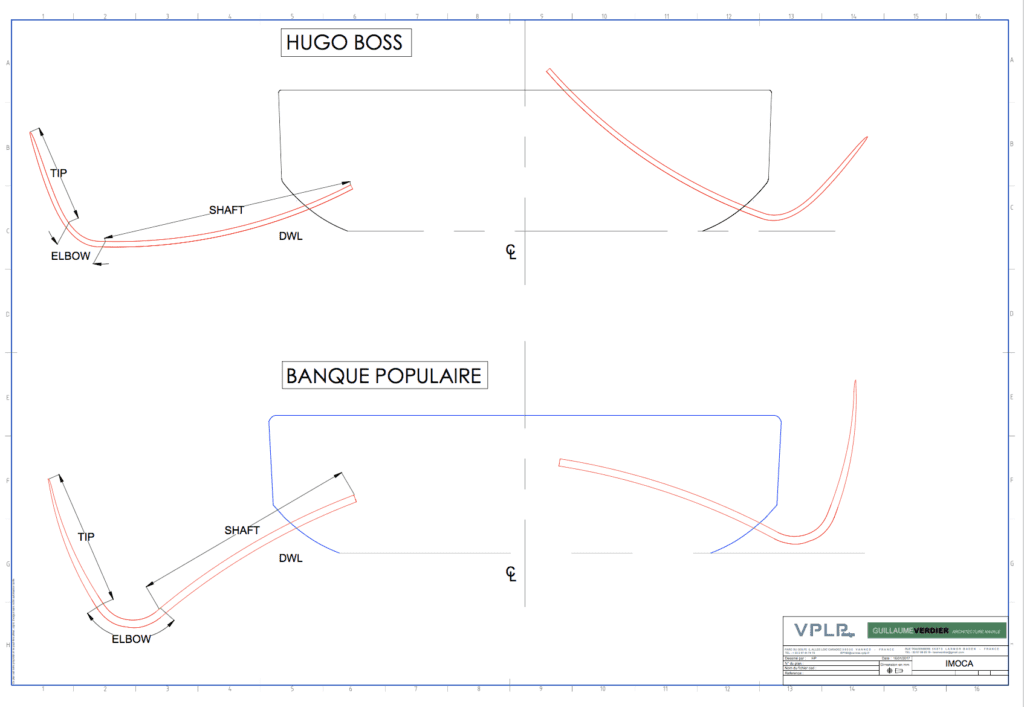 First, we tried our former concepts with a similar scientific package to previous designs. Then, stemming from our experience on the design of Team New Zealand’s AC72 for the America’s Cup (2013), we decided to introduce foils into the design of the new 60 foot boats.

These innovative foils are made up of three sections: the shaft, the elbow turn and the tip. The elbow creates the vertical lift force and the tip provides the side force. We call them Dali foils because they look like the famous painter’s moustache.

During the conception of these foils, we collaborated with Len Imas who I worked with at ETNZ, and Romain Garo, for the flow calculations. To reach a compromise, we used the VPP (Velocity Prediction Programme) conceived by Dan Bernasconi. VPLP launched and supervised wind tunnel studies, in parallel. Also, I developed digital platform of finite element calculations with Benjamin Muyl, to assess the boat’s solidity.

We aimed to make the boat more homogenous, while predicting increased violence of the wave impact. Rigs and keels were brought back. The front shapes are fuller to compensate the increased thrust of the sails.

The foils relieve almost all the boat. We improved their performance in the second set making them thinner and less disruptive at the water surface. The tip plays a huge part in this.

Gitana and St-Michel-Virbac associated for their boats’ design. The deck plans are different than previous versions. The deck gear is lowered and the cockpit is entirely covered. The new hull we provided is very long, despite the fact that it is not always relieved by the foils (when sailing upwind for example). The new IMOCA class standards restricted the ballast volume, but the quantity of water on board is lowered.

Hugo Boss was developed for a radical programme, following Alex Thomson’s decisions. The foil pushes a greater part of the boat’s weight. The boat is a little narrower. You must work assiduously to benefit from the dynamic balance. The sailor must be very careful to always tune the boat in the best way (sails, keel angle, daggerboard).

Conclusion… on the finish line.