At 0930 UTC this morning (Monday), while he was sailing 600 miles west of the longitude of Cape Leeuwin, Sébastien Josse contacted his shore team to inform them that he had suffered major damage to the port foil on Edmond de Rothschild.

Taking into account the weather conditions the skipper of Gitana Team has had over the past 24 hours and the worsening weather that is forecast in the area in the coming hours, the skipper in agreement with the team’s owners, has temporarily put the race to one side and is currently studying the best possible options to allow the worst of the storm to go by.

Since yesterday, Sébastien Josse has had to face some very rough conditions ahead of a tropical low coming down from Madagascar. This morning, while sailing on the port tack in a westerly air stream blowing at between 30 and 35 knots and on heavy seas with waves in excess of 4m, the 60-foot monohull, Edmond de Rothschild got swept along on a wave and then ploughed into the bottom. 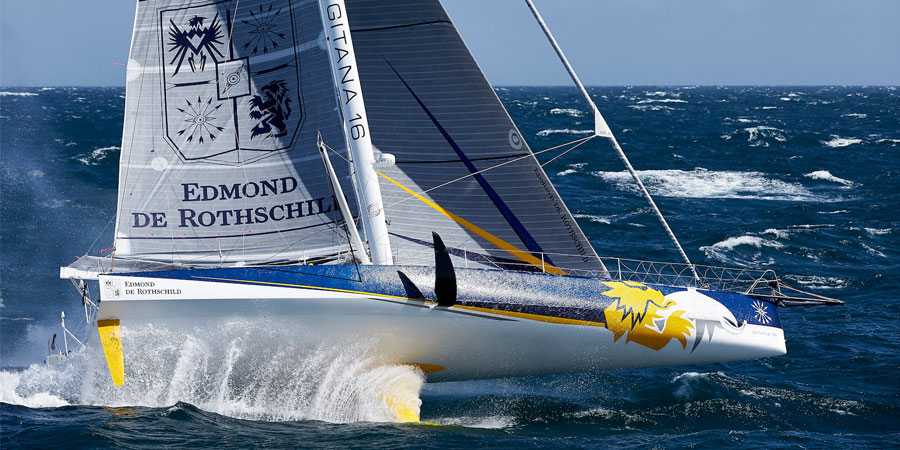 The boat came to a sudden standstill and in the incident the port foil suddenly went right down. It slammed into the top of the housing, which damaged the upper part of the appendage and its trimming system. Sébastien Josse was inside when the incident occurred and was not injured.

In order to make safe the foil, which threatened to come out of its housing, which could have had serious consequences for the structural integrity of the hull in this part of the boat, Sébastien Josse gybed to change tack and continue on his starboard foil while trying to carry out temporary repairs. Gitana 16 was on a N-NE’ly heading towards Australia, but for safety reasons was unable to continue on this course for very long.

This is in fact the precise trajectory taken by the centre of the low pressure system that the sailor has been trying to avoid for the past 24 hours by making headway towards the east as quickly as possible along the Antarctic Exclusion Zone. According to the latest forecasts, the sailor was likely to be facing 50-knot winds and very heavy seas with 10 m high waves. Since 1300 UTC the 60-foot monohullEdmond de Rothschild has gone back to a SE’ly heading.

Sailing Nandji Ep 280 AN ENTIRE ATOLL TO OURSELVES!

Sailing Nandji Ep 280 AN ENTIRE ATOLL TO OURSELVES!