As often happens, the Gulf of Gascony has made its choices through testing the resolve and spirit of the sailors. While the leaders continue to skip along quickly and to burn up the miles in their boats, those behind are suffering. The less seasoned sailors have had to grin and bear it through the gusts of wind, the still choppy sea along the coast of Cantabria and the biting cold. It’s important to remember that the Mini Transat îles de Guadeloupe is all about playing the long game. In order to try for a good position in the race, you need to actually arrive at the finish.

Cap Finistere is already a long way in the past for Davy Beaudart, who continues to dominate the fleet of Minis with the rounded bow of his Maitre Bau. Frédéric Denis (Nautipark) is trailing behind by 27 miles, and there are 5 who are vying for third place just three miles behind him. Clément Bouyssou (Le Bon Agent ! Bougeons l’Immobilier) is trying to stave off the assaults from Axel Tréhin (Aleph Racing), Ludovic Méchin (Microvitae) and Simon Koster (Eight Cube) in a squally sea, where the wind is swinging little by little to the north sector. 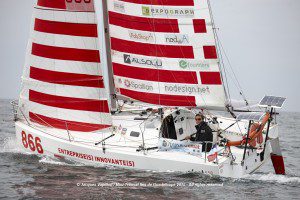 Series boats: Still a weak range of positions
In the series boats, Ian Lipinski (Entreprises Innovantes) is still in the sights of Tanguy Le Turquais (Terréal), Benoît Hantzperg (YCA Dhumeaux Secours Populaire) and Julien Pulvé (Novintiss). 5th place sees the return of the Belgian sailor, Jonas Gerckens (Netwerk) who has made a staggering recovery over the last 40 hours, rising up through 34 places. Jonas himself said, “I am quite like a diesel engine”. It seems, then, that he has made a good choice of fuel this time. It’s also important to look at the sailors who chose to pass to the west of DST, in the wake of Olivier Taillard (Alternative Sailing – Kerhis) and Mathieu Bourdais (Tous au Large): their choice spread the boats out along the route, but they will probably benefit from a little more wind and a better angle of following wind to attack the descent along the Portuguese coast.

Worn out by the Gulf
For the peloton pack, the Gulf crossing has resembled Purgatory. It wasn’t so much the Dante-esque conditions, but the switching between long periods of calm followed by muscular winds that shook the entire fleet. Several competitors sustained some injuries: Romain Mouchel, hurt his hand, and does not know if he will set off again from Lorient, Gilles Avril suffered a general problem (probably a dismasting) and will be in contact with an accompanying boat this evening. News of two other competitors heading towards Gijon: Florian Lakeman (Gimmick) had only just arrived when he signalled his abandonment of the race, as he is ill and will probably not carry on. The race veteran, Carlos Lizancos (Allianz-Saray) will also have to stay in the Asturian port for a little while. 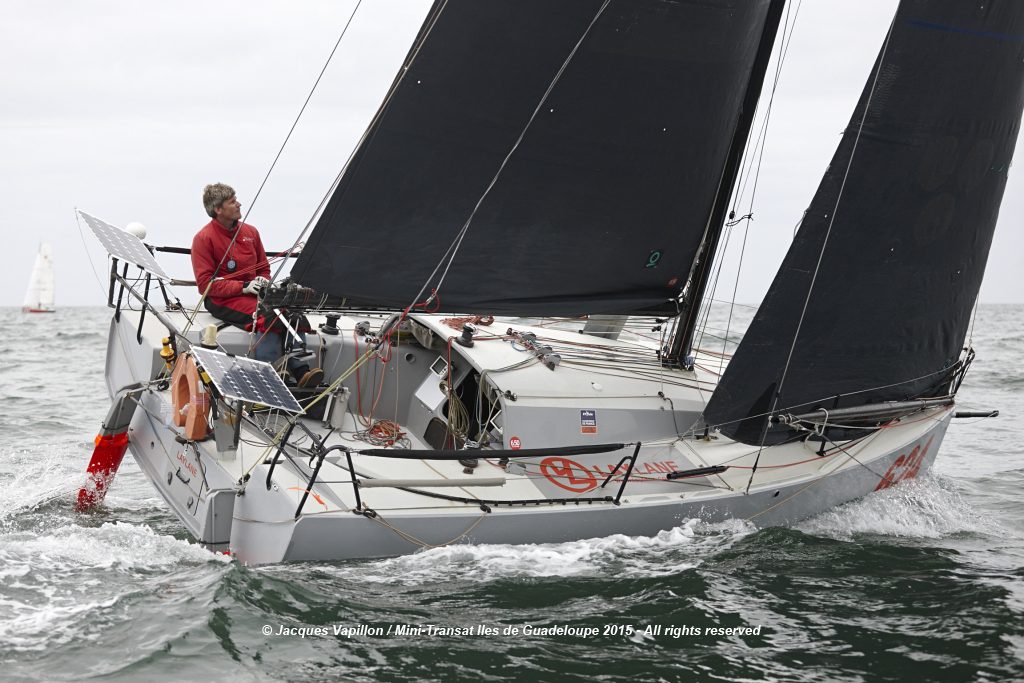 Maxime Eveillard (Héli Stratégy) has some concerns with rigging, and will head for La Corunna. Other competitors also seem to be heading towards land, such as Dominik Lenk (Dominiklenk.com) and Yury Firsov (Magnum Sport). This cascade of withdrawals highlights that some sailors have to continue, come what may, without even focussing on winning as an antidote to the inevitable trickier times. In the front, the pressure for good results is a source of motivation. Behind, it pushes people on to try and stay in the race, to think back to the preparation days, the hours passed fitting out the boat, the sacrifices that they underwent to make their dream come true. All in all, there is still a lot of promise for the long journey: to find the sun, to surf along on the sea, perhaps to be accompanied by dolphins under a full moon. In those moments, the memories of the Gulf of Gascony will be quickly snuffed out. It’s the super-power of a solo-sailor to know how to forget these things.