There’s only one more day until the opening of the 2018 Cannes Yachting Festival. Without a doubt one of the most interesting new yachts is the Grand Soleil 48, created by the coordinated efforts of three important teams: the Cantiere del Pardo Technical Department, Nauta Yacht design (deck and interior layout) and Marco Lostuzzi (naval architecture). To discover all the secrets of the latest creation of the Cantiere del Pardo we interviewed Marco Lostuzzi.

Owners of a Grand Soleil 48’ can choose between several different types of construction; what can you tell us about them?

We prepared three different composite constructions. Based on PVC and hand-laminated fiberglass synthetic resin sandwiches, the first version, the Fast Cruise, uses an excellent osmosis-free resin with lots of unidirectional fibers for the hull and deck, in carbon to provide greater strength. The Fast Cruise version is primarily oriented towards cruising, but with a good touch of speed.

The second version is also in fiberglass resin, but built using an infusion process with epoxy to further reduce weight. Here we replaced the unidirectional fibers with carbon in both the hull and deck to create a very rigid yacht. The mix is also post-cured to fully exploit the benefits of epoxy. This lighter and more rigid version was created primarily for more serious racing, but can still be used for cruising.

The third and most sophisticated version is entirely built with infused carbon epoxy and post-cured at very high temperatures, making the yacht even lighter and stronger. This version is primarily designed for racing, but her fully fitted out interiors also allow for cruising.

Performance or Race versions: what are the differences and strengths of the different deck layouts?

The Performance version comes with two winches on each side, just aft of the combing forward of the helm, allowing the mainsheet trimmer or just the helmsman to handle all the lines, and a self-tacking jib making her easy to solo sail. With the optional fore and aft genoa lead tracks and a Code Zero, this layout is perfect for costal and offshore racing too.

The Race version includes six winches in a classical layout: two for the mainsheet, two primaries for the genoa and spinnaker sheets and two for the halyards. The fore and aft genoa lead tracks and bowsprit attachments are standard and this version is ready to race, but will require a larger crew given the increased distance between the winches.

We also created an even more high performance racing version with two more winches for the twin backstays, cross-mounted genoa tracks with height control and a hydraulic forestay piston. This version is a sophisticated racing machine requiring an expert crew.

While designing the Grand Soleil 48’ you worked with Nauta Yacht Design for the deck and interiors: what were the primary difficulties encountered when building a performance hull while maximizing interior space?

Actually there weren’t many difficulties. While designing the hull shape with sophisticated CFD programs we concentrated only on performance. Fortunately the latest generation hull forms are fairly wide aft, with a higher freeboard than before, so internal volumes are considerable even with a hull shape designed purely for performance.

Is it true that you can also configure the window openings in the hull?

Yes, because who just wants to race is more interested in weight saving than in how the interiors are illuminated.

What kind of owner is the Grand Soleil 48’ aimed at?

The GS 48’ options go from day sailing to world championships, so the spectrum of owners is actually quite vast, though surely they all will have in common the desire to own a quick, well designed and easy to sail yacht. 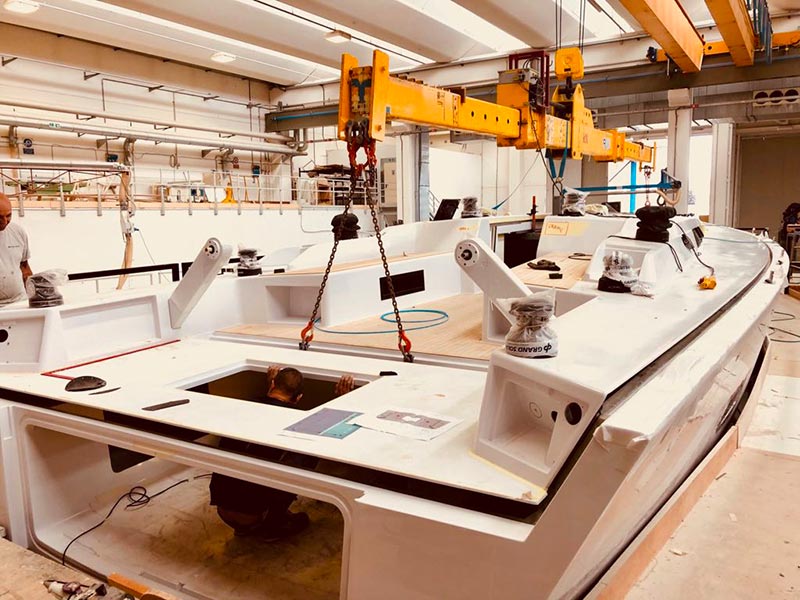 How did you manage to create a sail plan that that was both powerful and easy to handle?

Here too we developed three versions, all 9/10 with a large mainsail, a 108% jib, and bowsprit mounted gennaker. This a manageable sail plan to handle as the main is the easiest sail to control, the foresails are are relatively small and therefore easy to tack and rollup or drop, and the gennaker is much easier to handle than a spinnaker. The standard version has a generous sail area, but not too difficult to handle, the Race version has a taller mast and therefore a more powerful sail plan, while the high performance version has a square-top mainsail and a longer J for even more power, but calling for constant trimming.

The Race version interiors are easily removable to create space for lots of sails without ruining the woodwork: what were the technical difficulties here?

The Race interiors are made of lightweight wood with special bushings to make them easy to remove. They weren’t that difficult to design but give us the added advantage of making the boat even lighter and easier to move sails around belowdecks during racing.