With the mast was broken in two parts on the deck and sails jumbled on the trampolines, you could see the fight that they had to recover the rig after the dismasting.

Maxi80 Prince de Bretagne dismasted just 93 miles from the finish line of the Transat Jacques Vabre in Salvador de Bahia. The 80ft trimaran, Prince de Bretagne was sailing off Palame, in north-east Brazil near the end of the 4,350-mile race from Le Havre in Normandy, France.

Obviously, after the request to be towed by the Brazilian Navy meant the end of race and Prince de Bretagne will not be classified in the raking. Bitter about their fate but willing to talk, Lemonchois – a winner in 2005 – and Stamm explained what had occurred 24 hours earlier after the rupture of a shroud, 93 miles from the finish line.

“We’re happy to be here, but that’s three Transat Jacques Vabre with Prince de Bretagne, and I haven’t finished one, that starts to feel like a lot. But we felt good for this one. Anyway, the big news of the day is that I learned this morning that I will be grandfather, it’s the best news this year!

We’re disappointed…since morning, we’d been at full speed, we had ideal conditions, under gennaker, full mainsail, 16-17 knots of wind, speed 26-30 knots, not even on a hull, nothing, extraordinary, great conditions to arrive. And all of a sudden, it was falling. It started softly, it was amazing. I didn’t feel it too much, Bernard was at the helm, he felt that the mast was falling.”

“When the rig is under tension, the platform is under tension. When it’s loose, it’s ‘bing!’ Everything came down. We tried to get the mast back as fast as possible but it broke quickly. 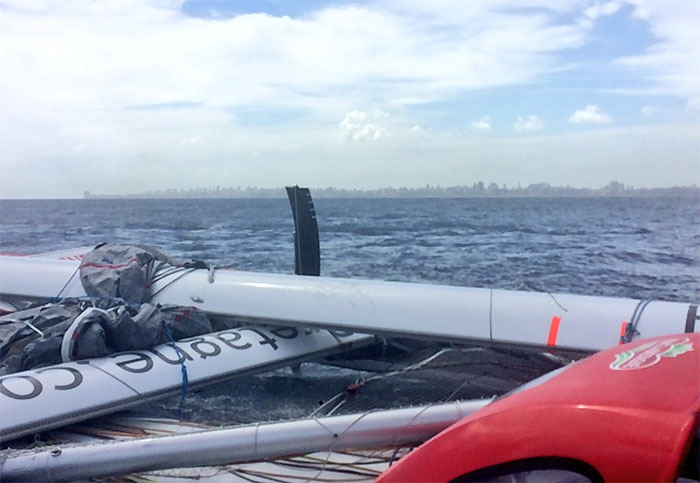 “We had pull from the bow. It (the mast) broke between the foot of the mast and the float. At one point, we thought we could bring everything back without breaking anything. I was angry at the time. It’s the third time with Prince de Bretagne, and I was keen to finish this one. Everything was right for this one to end well. “

“We had prepared for the arrival, Lionel had even shaved. We were ready. It’s obviously different for me, it’s just the disappointment of not finishing the Transat Jacques Vabre. I’m sorry for Lionel and Prince de Bretagne. Especially since we were super conservative, it’s annoying..but we’ve done well because there’s only minor damage except the mast. We have all the sails.”

“It was a pleasure, we had a good time. but we had our struggles too. The mainsail halyard that snapped – which never happens; we also had an (engine) starter failure.

From the beginning of the race, we took it easier, we knew that it was not worth doing something silly with the two maxis in front. I had given myself 24 hours of separation with them – we could have done it!”

Read also “Lemonchois and Jourdain rescued in the Atlantic Ocean“