Next Saturday Italian sailor Gaetano Mura will leave Cagliari, in Sardinia, for a 25,000 nm long, single-handed round-the-world voyage on a Class40 called Italia, aiming at the new distance record.


On Saturday, October 15, Sardinian navigator Gaetano Mura will leave his native island on board a Class40, aptly called Italia for a voyage that will take him around the planet in an attempt to set the new time reference. Gaetano has been training for over one and a half year for this challenge: to sail more than 25,000 nautical miles around the world and beat China’s Guo Chuan record of 137 days.

The start, that was originally planned for Wednesday October 12, has been delayed due to adverse weather conditions in southern Mediterranean. A powerful low-pressure forming over the Eastern Atlantic has been intensifying constantly and Gaetano Mura’s weathermen forecast winds as strong as 50 knots on the area accompanied by violent rainstorms and high seas, up to 6 metres. A situation that has urged Mura’s shore team to postpone the start for safety reasons and to enable the public to say goodbye to Gaetano. 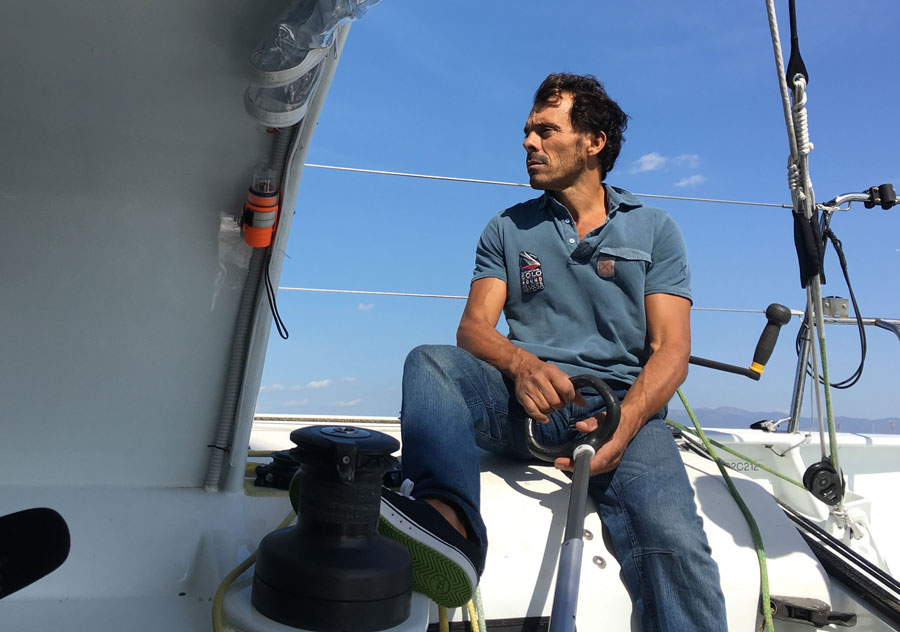 Gaetano Mura’s circumnavigation will last some four months and will start from Cagliari, in the southern Mediterranean. Once past Gibraltar and into the Atlantic ocean, the Class40 Italia will head south to the Cape of Goof Hope and will then sail clockwise around Antarctica, leaving to port Cape Leeuwin and Cape Horn to head back to the Mediterranean.

The total distance on a theoretical, straight line is of 25,000 nautical miles. A large part of the navigation will be in very harsh and unwelcoming environments, with extreme weather conditions, very close to polar ices. Gaetano will sail non-stop, single-handed and with no outside assistance. To rest, efficiently Mura will use a technique called “micro-sleeping”, that is to say 2 hours wake periods alternated to 20 minutes’ long naps. His sleep, mental and health parameters will be constantly monitored by a medical team from the University of Cagliari.

The Italian sailor will also follow a special diet on board, that includes organic food from Sardinia, the island being one of the few Blue Zones, that is a region with the highest longevity on the planet. Italia is a Class40 designed by French Sam Manuard and built by Bert Mauri, that has been especially tested and equipped for the upcoming navigation.

Gaetano was born in July 1968 in Cala Gonone, on the eastern coast of Sardinia, Italy, where he’s been living ever since and developed his deep relationship with the nature and the sea. He started working as a ship’s boy on fishing boats, later becoming captain on small passenger ships. At twenty he bought a run down 23 metre long sailing vessel, restored and chartered it to make a living. This experience represents the foundation of his sailing career. A self-taught sailor, Gaetano slowly turned his passion in commitment, through study and determination. He has crossed the ocean five times, twice single-handedly, and has taken part regularly to offshore races in the Mini 6.50 class first and later in the Class40.

A large part of the navigation will be in very harsh and unwelcoming environments, with extreme weather conditions, very close to polar ices.

Gaetano’s calling is for solo sailing, that he believes better fits with his physical abilities and psychological approach. He participated to the Mini Transat in 2009 and, shortly after launched his round-the-world project, building his Manuard’s Class40. The boat is launched in March 2012, Gaetano Mura grabs his first win at the Palermo-Montecarlo race and a second place in the famous Rolex Middle Sea Race, debuting on the ocean one year later with the 2013 Les Sables-Horta-Les Sables.

In November, Gaetano together with the baot’s designed Sam Manuard are on the starting line of the prestigious trans-atlantic race Transat Jacques Vabre, from Le Havre in France to itajaì in Brazil, where despite a dismasting the duo manages to bounce back, keep on racing and cross the finish line in tenth place overall. After this experience, Gaetano started working on his round-the-world project, that will become a reality next Saturday, when he will be leaving his homeport of Cagliari bound to sail all around the planet and back to Sardinia.