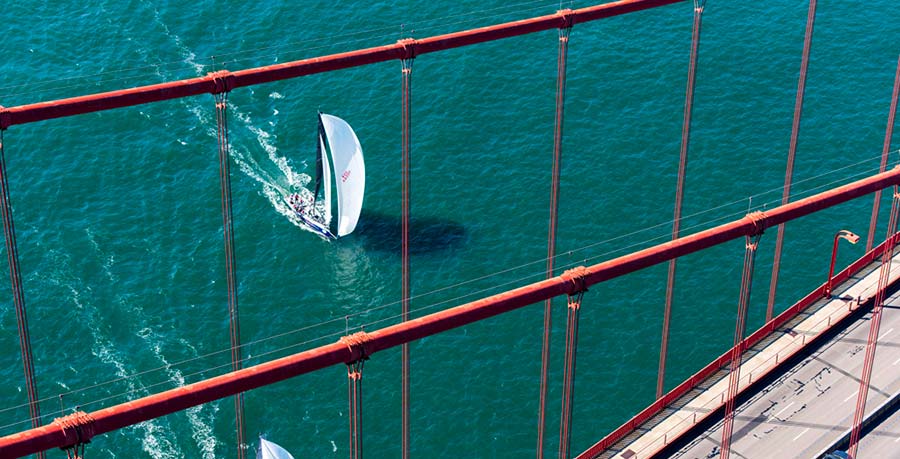 These aren’t just any regatta trophies. They are the oldest of the St. Francis Yacht Club’s six most important perpetual awards presented each year at the Rolex Big Boat Series, which on Sunday completed its 51st edition on San Francisco Bay. The St. Francis Perpetual Trophy is historically significant as the namesake of the inaugural series (1964) that led to the Big Boat Series and then to the Rolex Big Boat Series in 2005, when Rolex transitioned from presenting to title sponsor. The City of San Francisco Trophy (added in 1968) is unusual yet charming: one of two golden spades used in 1933 to break ground for the Golden Gate Bridge. The trophy seems fitting especially because the “Gate” figures predominantly into the racing here—strategically when the racecourse passes beneath it and visually when it joins Alcatraz Island and the San Francisco city front as iconic backdrops for the action.

“Excellence is the rarest thing in the world,” said Bud’s owner/skipper Victor Wild, addressing hundreds of sailors from the stage at the Rolex Awards Ceremony. “We came here for that, and we found it. I’ve never seen boats sailed better or better boats sailed. It’s a wonderful thing for us to have the honor of sailing with you.”
Bud won all of its five races against Patches, another TP 52 from Mexico, so when today’s final scheduled race had to be cancelled (in all classes) due to lack of breeze, Bud’s five-point lead remained unchanged. Long-time competitors were hard-pressed to remember the last time a race day at the Big Boat Series got cancelled. They were thankful, nevertheless, for two days of heavy air followed by yesterday’s lighter breezes: it meant bragging rights could be enhanced by declaring one’s versatility in a variety of conditions.

After yesterday’s racing (shortened from two scheduled races to one), point scores were tied in the Multihull and ORR C classes, and mere one-point separations existed for leaders in the ORR B, J/111, J/120, and Express 37 classes. That said, today’s race would have been far from a moot point.
A case in point was the heated battle between Peregrine and Chance in the J/120 class. “Racing against Chance, my heart was in my throat at every tack,” said Peregrine’s skipper David Halliwill. “They were always right there, and there was never a moment when we weren’t thinking this wasn’t going to happen our way.”

Shawn Bennett, driving Jose Cuervo, had a different experience in the J/105 class, where the J/105 North American Championship also was at stake. With four bullets in five races, he was quite solid going into today, with a ten-point lead on the largest fleet here (27 boats).
“Winning means a lot to us, because we’ve tried a few times at the North Americans and have fallen short of winning a few times at the Rolex Big Boat Series,” said Bennett. “It’s two things in one: checking boxes that we weren’t successful at checking in the past.”
As for winning a Rolex timepiece for his efforts, he added, “Hands down, it’s the nicest trophy I’ve ever won.”