The International Laser Class Association (ILCA) announced the release of a completely new class-legal design for the Laser standard rig sail. The release marks the first time in over 40 years that the Laser sail design has been substantially updated.

Known as the Standard Mark II Sail, the new patented design is the result of thousands of hours of design work and on-the-water testing involving the Laser builders, the Association, two major sailmakers and some of the world’s top sailors.
The Mark II features bi-radial panels, a heavier 4.5 ounce cloth and optimized reinforcement patches, all intended to maximize the sail’s competitive life. The sail also features tapered battens with Velcro batten pocket closures, a larger window for improved visibility and a patented re-designed luff tube to eliminate wrinkles at the mast joint.

“This is a quantum leap forward for our class,” says ILCA President, Tracy Usher. “For several years the number one complaint about the Laser has been the outdated sail design. We’ve put a lot of time and effort into this new sail design and we’re really happy with the result.” 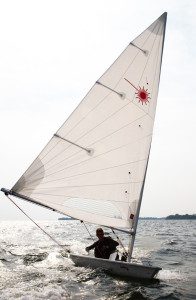 As with all changes to the Laser, the new sail has been carefully designed to be backwards compatible with the existing equipment, meaning it was not designed to provide improved performance. Instead, the Mark II promises improved durability and ease of use.
According to ILCA Technical Officer, Clive Humphris, “The main objective of the design project for the Mark II was to create a sail with equal performance to the existing sail, but with better durability. We worked very hard to ensure that the Mark II was not a faster sail and wouldn’t make all the existing sails obsolete overnight. The original Laser standard sail will continue to be available through authorized Laser dealers and we fully expect to see the two designs racing side-by-side for a number of years.”

The initial run of class-legal Mark II sails will be available starting 1 November 2015, with worldwide availability by early 2016. Because of the timing of the release, by agreement with International Sailing Federation (ISAF) the Mark II will not be used in the 2016 Olympic Games or any Olympic country qualifying events for 2015 or 2016.
The use of the sail will be controlled by the Notice of Race for each event until after the 2016 games. After that time, the Mark II will be allowed in all ILCA sanctioned regattas along with the original standard rig sail.
“Because many of the Olympic qualifying events have already occurred, we’ve agreed with ISAF that we shouldn’t make any major changes to the equipment for the 2016 games at this time,” says Usher. “Our goal is to have the Mark II sail available worldwide for the start of the next quadrennium, leading up to the 2020 games in Tokyo.”