Amsterdam-based French businessman Laurent Lenne originally conceived the GC32 catamaran, the first examples being launched at the end of 2012.

Inspired by the fully foiling catamarans used in the 34th America’s Cup in San Francisco, over the winter of 2013-4 the GC32 was fitted with second generation foils transforming it into flying boat.

Compared to the America’s Cup catamarans, the GC32 has proportionally larger foils, giving it a more stable ride and a conventional rig rather than a wing, making for simpler logistics. These features, among many others, are designed to make it easier for professional and good amateur sailing teams alike to take up yacht racing’s very latest discipline. Despite being user-friendly, the GC32 has still recorded a staggering top speed of 39.21 knots. 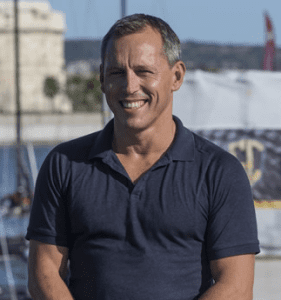 So Laurent, what is the deal behind this deal?
“Let me say that I am proud of the decision by the Extreme Sailing Series to adopt the GC32 foiling catamaran from 2016. This will no doubt help make the GC32 footprint bigger and the class stronger. And this is good for all GC32 owners.”

Will the two GC32 circuits continue next year?
“Yes. Of course!”

Do you think there is enough space in the market for two circuits using the same boat?
“Yes, because they are completely different.”

Can you explain?
“First let’s start with the racing.

“The Extreme Sailing Series caters for professional, sponsored sailing teams, providing a worldwide circuit of venues. The circuit is specialised with short ‘stadium sailing’ race courses providing the ultimate close quarters spectator experience for both its corporate guests and general public. The ultra-short courses make the racing more ‘extreme’ and demands great boat handling from teams. The stadium course allows 10-12 teams to race on it, maximum.

“The GC32 Racing Tour caters principally for private owners or sponsored teams on a  European circuit of around five events. The circuit is meant for sailors preferring longer and safer courses, similar to those developed for the 34th America’s Cup with high speed reaching starts and finishes and with two gates allowing for more tactical battles. The bigger course allows the Tour to have many more than 10-12 teams on the water.

“Both circuits have their own dedicated race management teams to ensure safe, consistent and fair racing.

“Both circuits will race under the same GC32 class rule.

“Secondly the venues are different:

“The Extreme Sailing Series selects major cities like Saint Petersburg, Sydney and Istanbul, etc, based on the fee the city pays, plus the short course, VIP and sponsors requirements. The circuit is global with venues dotted around the world. Crews are not allowed to train at the venues outside the racing period.

“The GC32 Racing Tour venues are selected by the owners and teams and are mainly where the sailing conditions are optimum to enjoy sailing the GC32 (ie steady wind to get foiling and enjoy maximum speed, longer courses, nice weather, nice accommodation, etc) – let’s say Mediterranean-type venues! Possibly existing regattas will form part of the Tour (as was the case with the Round the Island Race this year). The venues are also only at present in Europe minimising transportation cost and increases the number of days teams can spend sailing their boats. There is also no limitation on practicing in Tour venue locations.

“Commercially and economically, both circuits deliver their own VIP Experiences, but I believe in different formats too: The Extreme Sailing Series targets a more corporate atmosphere while the GC32 Racing Tour delivers a more community atmosphere.

“Finally costs of competing in each circuit are very different – the Extreme Sailing Series with eight global venues costs about two to three times as much as the GC32 Racing Tour.”

Could teams do both circuits?
“Yes, the dates of both circuits will be aligned to allow teams/crews to compete in both. This is good for everybody – Pros and new owners allowing them to get up to speed as quickly as possible.”

VIA THE GREAT CUP