New Zealand skipper Conrad Colman is fighting an incredible battle to finish the Vendée Globe after the mast of his Foresight Natural Energy crashed down on the night of Friday 10th February.

Since he managed to set a jury rig four days later, he has sailed half of the 730 miles he had still to make to the finish line to Les Sables d’Olonne. But every mile has been a battle. He has only emergency food rations left and only enough power for four more days if uses the absolute minimum of power. But the tough Kiwi battler is committed to finishing he race with no emissions, using only renewable energies generated on board. 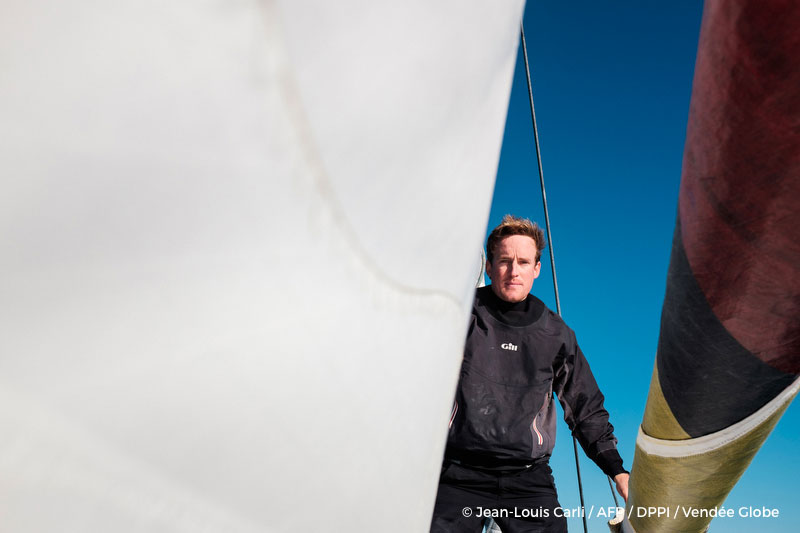 He spoke to Vendée Globe HQ today for the first time since he lost the mast while racing in 30-35kts, conditions which were manageable compared with the biggest of the storms Colman came through in the Pacific. He has dropped from tenth to fourteenth but speaks today of hoping to finish in five more days of sailing.
Meantime he is low on energy and needs sunshine for his solar panels to work better. “I am almost clear of the TSS and so I am almost clear of the cargo ships. It feels a bit like I am crawling across a highway. Other than that it is going OK right now.”

Of his feelings after the accident he said: “It was unbelievable when it happened. I felt like I had been through so much at that point. It has not been an easy Vendée Globe at all. I don’t think such a thing exists but my one seems to have been particularly difficult. I felt I was in the clear. I was in a crazy depression but I had been through the eye of the storm, the wind was as forecast.” 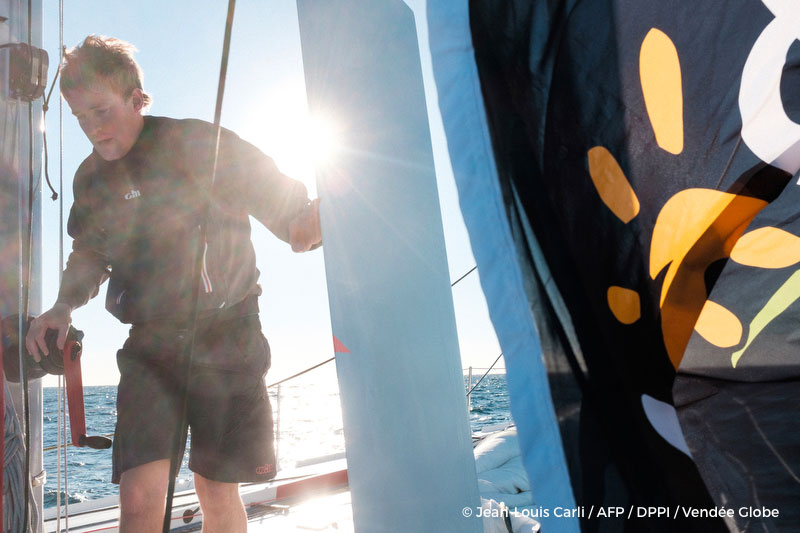 “I was reaching in 30kts which, after everything I have been through, felt pretty negligible. I had the J3 small jib and two reefs in the main which was the right kind of sail plan for the conditions. Then when it all fell down about my head I could not believe it. I felt like I had failed, the stewardship of my boat, and the stewardship of my race. It was heartbreaking. There are the emotions of ‘my race is over’. There is the stress of the mast and sails that have just gone over the side cost more than my house, and I have already got a mortgage on my house and so it is pretty terrifying. Emotionally, financially, in every scenario it felt like the pits.”
But he immediately knew he wanted to fight on, he had come too far and gotten too close to home, and committed too much of his life: “It is all about finishing. I called my wife, I called Race Direction and said I did not require assistance. I was not going out. I was going to wait and see what happened. I curled up in a ball and went to sleep. I was numb to what had happened. That was, of course, after cutting everything away. Then metaphorically and literally a new day dawned. I felt like I have come all of this way and I was driven by anger and bloody mindedness, stubbornness, to not be beaten on the doorstop of the race.”

“The fact that the conditions on deck were dangerous just ignited another level of energy and passion in me, to make feel like I could fight through this problem.”

“I launched into the repairs. That was a big job. The boom is attached to the deck rather than the mast, specifically for the reason that it can be used as a jury rig, had snapped. And so I had a nine metres long pole which weighs between 80 and 100 kilos fractured on the deck. So I had to build a pile of sails to align it and then glue it back together. The conditions were still horrendous with a four or five metres swell breaking over the boat. But I was into a productive mindset. I was doing something about my scenario. And the fact that the conditions on deck were dangerous just ignited another level of energy and passion in me, to make feel like I could fight through this problem. People have been very supportive in their messages and e-mails to me. They are astonished by the energy that I can bring to bear, and the innovative solutions I can come up with. The jury rig is just a very visible manifestation of how I have been behaving since the start of the race. I had the keel ram come unscrewed when I came down through the Doldrums and that could have stopped my race right there. I found a solution with the tools I had to do something you can normally only do in a big workshop.” 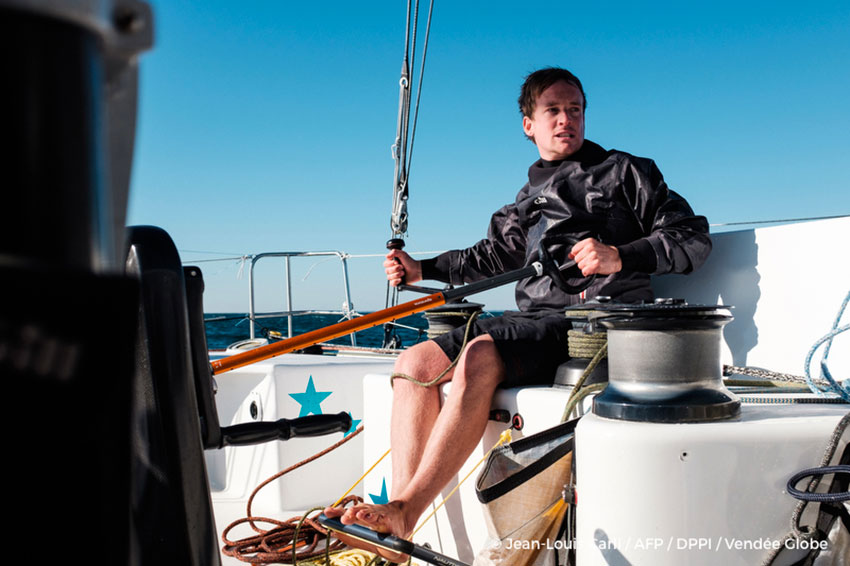 He has next to no food left: “I started out with 100 days of food and now I am at 105 and it took a lot of energy to prepare the jury rig and now I am down to a couple of packets of powdered soups and am eating from the liferaft spares. That means less than 700 calories a day…In the European winter out here that is very little, especially when I am working on deck so much trimming the sails.”
He has four days of stored power if he uses an absolute minimum. “I have 350 watts of solar panels on the cabin top which we installed just a few days before the start of the race. My preparateur Cyril looked at me aghast when I added another item to the job list just a few days before the end. But that is what is keeping my race alive at the moment. At 3.5kts I cannot use my electric motor as a hydrogenerator, that is the only thing that is keeping me going at the moment. To be making electricity from the engine I need to be doing seven knots which is of course double what I am doing now.” 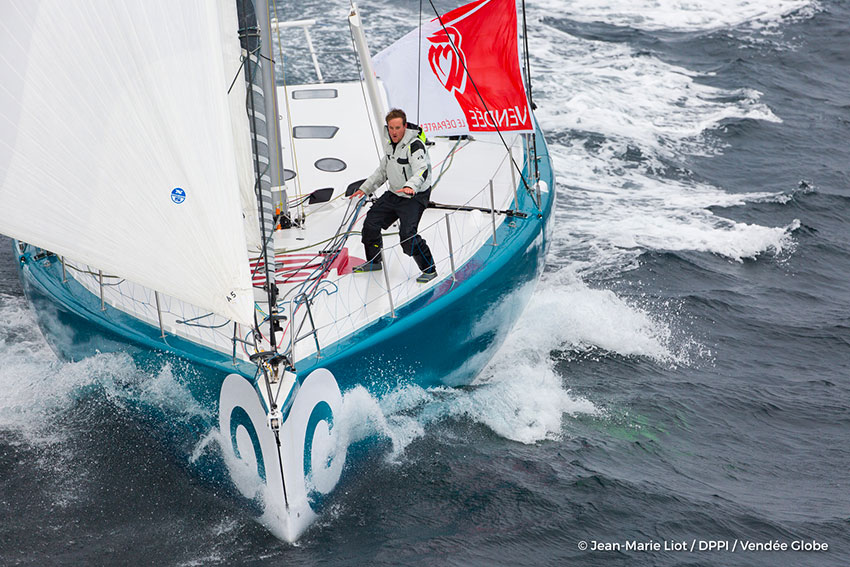 “At the moment I am estimating I have five days of sailing left and in that I will have a couple of really light days in the middle of Biscay and then there a depression coming and I am hoping to make good time towards the end of the week towards Les Sables d’Olonne and hopefully I might then reach the threshold of boat speed when I can actually charge with the hydrogenerator. At the moment I am nervously watching the energy tick down and at the moment things don’t really add up, I have – I think – five days of sailing through the water and four days electricity left and so I am really hoping that I can find a solution. Or, that the skies clear because it is grey.”
20 February 2017
5 minutes read
Facebook Twitter LinkedIn Pinterest Reddit WhatsApp Telegram Share via Email Print