HALLOWE’EN was built by William Fife III in 1926 on the Clyde in Scotland. As the Yawl – rigged COTTON BLOSSOM IV she dominated ocean racing for many years, and has held important records.

HALLOWE’EN was carefully restored to her original lines at the Classic Boat works in Newport, Rhode Island from 1988 to 1991. All the sawn English Oak frames were carefully repaired or replaced, the planking using new bronze fastenings made in the museum. 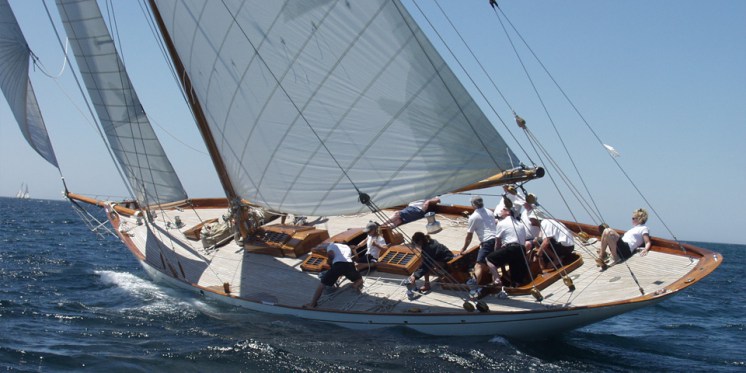 Following some major works in ‘94/5 in France, she again underwent a transformation in ‘98/9, looking now perhaps better than at any time during her long and eventful life. She was optimised for shorthanded cruising/racing, with revised plans by the Van de Stadt architectural studio. A new mast beautifully built by the team at the Pasqui workshops in Villefranche, and some new Meissner winches completed this refit.

During the winter of 2008/9 she went to the UK, where the expert craftsmen at Fairlie Restorations carried out some important structural work to the hull and keel.

She is considered the most beautiful Fife ever built and is still winning classic regattas whilst at the same time able to make fast passages across the oceans. With her new and intelligent deck layout she is able to be sailed by only two people for short deliveries, and can race with six crew, yet maintains all her traditional beauty and charm.