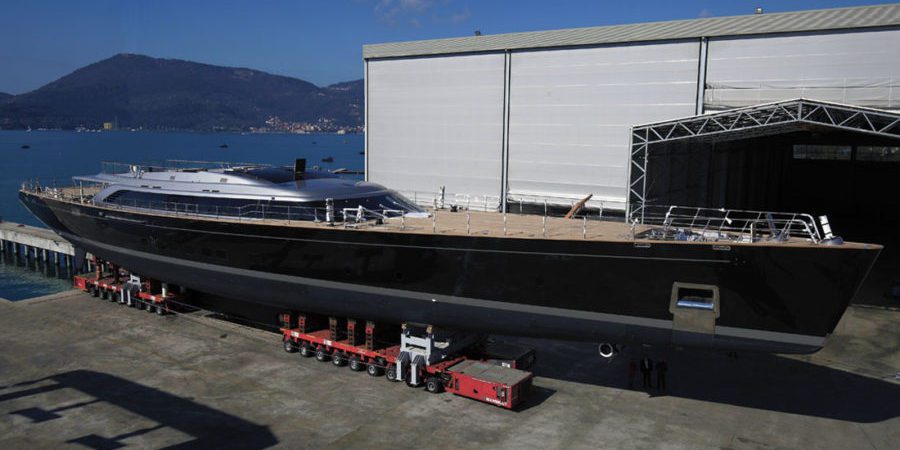 Perini Navi 70m Sy Sybaris is the largest sailing yacht ever built in Italy: video of the launching and mast stepping operations.

The 70 metre superyacht Sybaris by Perini Navi has been proclaimed ‘Best Sailing Yacht of 2017’ in both the 40-metres-plus category and overall at this year’s prestigious World Superyacht Awards. The official ceremony was held on 13 May in Florence, Italy.

Philippe Briand has designed the hull, underwater appendages, rig, sail plan and main characteristics of this modern 70 metre ketch. He is the main naval architect of the project.

The Jury panel commented their decision: “Sybaris not only impressed the judges with its sailing ability – particularly in light airs when many yachts of this size resort to mechanical power – but also in the yacht’s supreme comfort and optimum division of internal volume that entirely suits the owner’s needs. Some technical innovations have already been mentioned, but there are more in that the sail plan, rig and underwater appendages were subjected to extensive CFD testing, which allowed detailed optimization of rig, hull shape and appendages. Beautiful, capable, comfortable, and technically advanced this is a yacht that was considered supreme for its purpose”.

The streamlined and contemporary superstructure is topped with an impressive flying bridge that is 18m in length; the largest of any sailing yacht afloat. At 850 gross tonnes, Sybaris has wide-open and well-lit interior spaces with an innovative layout and smart storage solutions. The exterior design is by Perini Navi design office and the sophisticated interior design is by PH Design the Miami-based studio’s first yacht project.

Sybaris has a brand new power management designed by Perini Navi as are the innovative self-driven captive winches.

Philippe Briand said: “I enjoyed being part of this Design team and working with its highly talented members as Franco Romani of Perini Navi design office, PH Design, the shipyard Perini Navi and Bill Duker, the owner of Sybaris who brought this team together”.

Sybaris was also shortlisted as a finalist in six categories of the ShowBoats Design Awards, held in Kitzbühel in February 2017. She went on to take home more trophies than any other superyacht, including titles for Best Interior Layout & Design and Best Lighting Design, as well as the award for Newcomer of the Year, presented to PH Design.