Last winter one of my dock neighbors found a bagged sail floating in the marina.  He thought it was a bag of line, but on closer inspection discovered it was a sail, and gave it to me. When I spread it out, it looked terrible. It was filthy, rust-stained, smelly – it had obviously been in the water for quite a while. But. . .  the material was not bad. It wasn’t weak; there were no tears; all the edges were intact.

It had a wire luff and pendent at the head, and sheets attached to the clew with a snap shackle – that I couldn’t get open. Last week I spread it out again and took a stab at cleaning it. Here are some before and after photos. 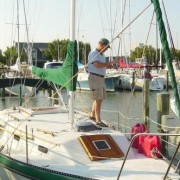 Since childhood I’ve been a sailing and boating enthusiast. I grew up in Florida and had the great blessing to live on lake-front property. It seems as though a great deal of my growing-up years were spent on or in the water. I swam, dove, skied, sailed, fished, skim-boarded, and played ten months a year. The other two months were a little too cool for being in the water, but I often fished then. My adult life arrived. Years of study, work, family and responsibility flowed by. Almost on a whim, I bought an 18 foot day sailor – and I was hooked. We’ve had several boats since then – including a ski boat when my boys were more interested in speed than going slowly. We now have a Watkins 27 coastal cruiser. We sailed her in Jacksonville, FL, then trucked her up to Maryland when I got stationed in Washington DC. We love sailing the Chesapeake, and we love time spent on the boat. I happen to like all the maintenance aspects of boat ownership as well, so owning an old boat fits me: lots to repair and maintain!
By Rick Bailey
All (10)
Back to top button
Close