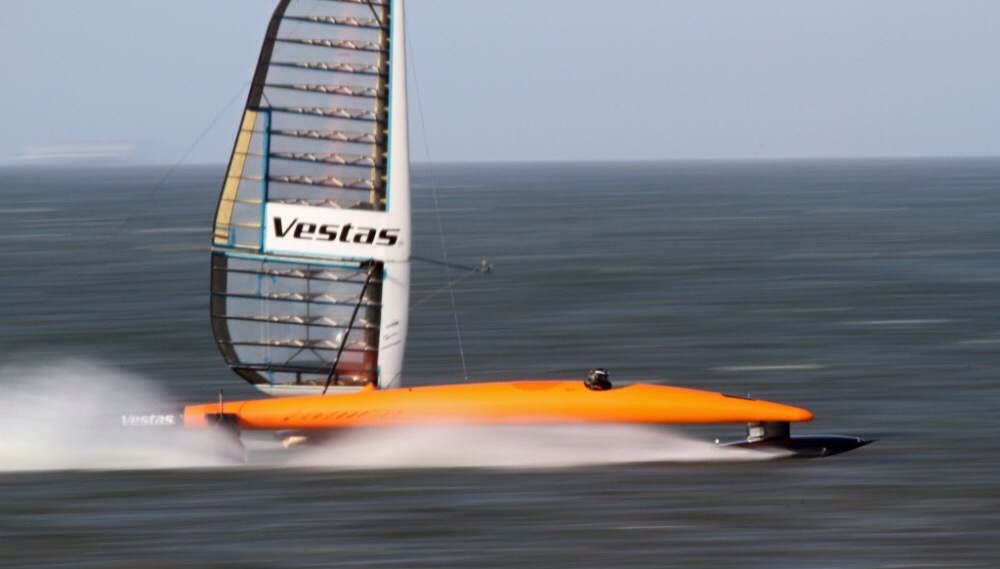 Weymouth Speed Week will run from 3rd to the 10th October at the Weymouth and Portland National Sailing Academy. Along with a line-up of interesting entries the current 500m World Speed Record holder, Vestas Sailrocket 2, will be on display at the Academy.
This fascinating boat is the vessel which Paul Larsen set the record achieving an outstanding 65.45 knots, over 75mph. Vestas Sailrocket 2 will be outside the front of the WPNSA for the duration of Weymouth Speed Week and fully accessible for member of the public to view.

Weymouth Speed Week has a strong field of competitors from across the UK and Europe signed up for action beginning this weekend. This will be a visual spectacle not to be missed with every vessel imaginable taking to the water on kites, sail boards, hydrofoils, conventional boats and custom crafts.

Lara Davis, the double women’s world speed record holder with 3 European championships and 8 British titels to her name is confirmed to compete. The national record holder for Belgium, Patrick Van hoof will also be on lining up in Portland Harbour.

Pete Allam, Chief Executive, WPNSA is keen to let the public know about the exhibition of the World Speed Sailing Record holder at the Academy this October, “Weymouth Speed Week is an important part of the local area’s history having started under the direction of the RYA in 1972. We are excited that the 2015 edition will bring Vestas Sailrocket 2 right to the heart of the Academy for everyone to enjoy and understand more about the world of speed sailing”.