Only 4 more days before the start of the America’s Cup 2017. Teams are ready to “fight each other” to conquer the oldest trophy in sport. But… do you know how the legend began?

First contested in 1851, the America’s Cup is the oldest trophy in international sport, predating the modern Olympic Games by 45 years, and is yachting’s biggest prize. 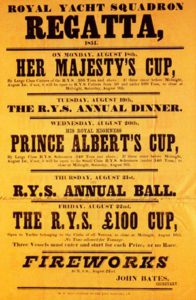 The trophy’s roots date back to when a syndicate of businessmen from New York sailed the schooner America across the Atlantic Ocean to represent the United States at the World’s Fair in England. The schooner won a race around the Isle of Wight and, with it, a trophy called the £100 Cup. (It was subsequently inscribed, incorrectly, as the 100 Guineas Cup).

After winning the trophy, the United States embarked on what would become the longest winning streak in the history of sport, a 132-year stretch of domination that saw boats representing the country successfully defend the trophy 24 times from 1870 through 1980—until 1983, when Australia II became the first successful challenger to lift the trophy

In 1851 a radical looking schooner ghosted out of the afternoon mist and swiftly sailed past the Royal Yacht stationed in the Solent, between the Isle of Wight and the south coast of England, on an afternoon when Queen Victoria was watching a sailing race.

As the schooner, named America, passed the Royal Yacht in first position, and saluted by dipping its ensign three times, Queen Victoria asked one of her attendants to tell her who was in second place. “Your Majesty, there is no second,” came the reply. That phrase, just four words, is still the best description of the America’s Cup, and how it represents the singular pursuit of excellence.

That day in August, 1851, the yacht America, representing the young New York Yacht Club, would go on to beat the best the British could offer and win the Royal Yacht Squadron’s 100 Pound Cup. This was more than a simple boat race however, as it symbolised a great victory for the new world over the old, a triumph that unseated Great Britain as the world’s undisputed maritime power.

The trophy would go to the young democracy of the United States and it would be well over 100 years before it was taken away from New York.

Shortly after America won the 100 Guinea Cup in 1851, New York Yacht Club Commodore John Cox Stevens and the rest of his ownership syndicate sold the celebrated schooner and returned home to New York as heroes. They donated the trophy to the New York Yacht Club under a Deed of Gift, which stated that the trophy was to be “a perpetual challenge cup for friendly competition between nations.”

Thus was born the America’s Cup, named after the winning schooner America, as opposed to the country.

The America’s Cup is without a doubt the most difficult trophy in sport to win. In the more than 150 years since that first race off England, only four nations have won what is often called the “oldest trophy in international sport.” For some perspective, consider that there had been nine contests for the America’s Cup before the first modern Olympic Games were held in Athens in 1896.