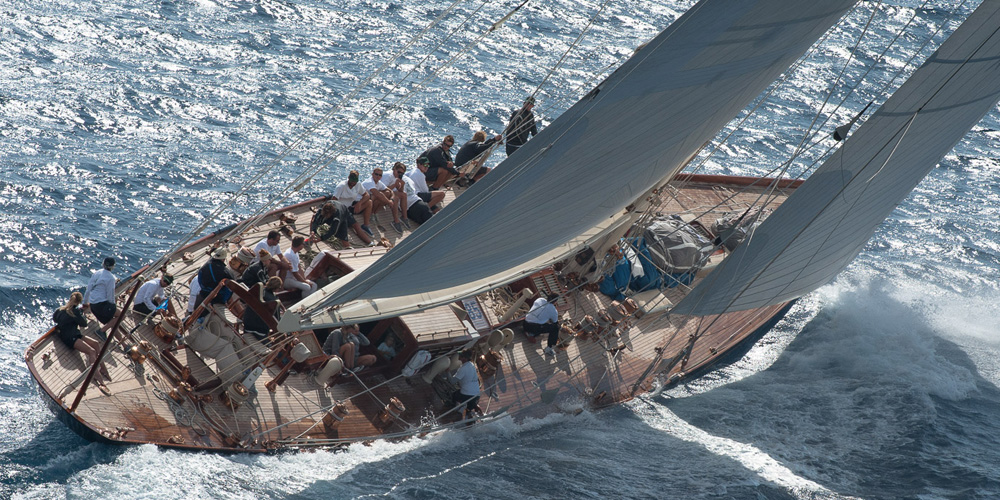 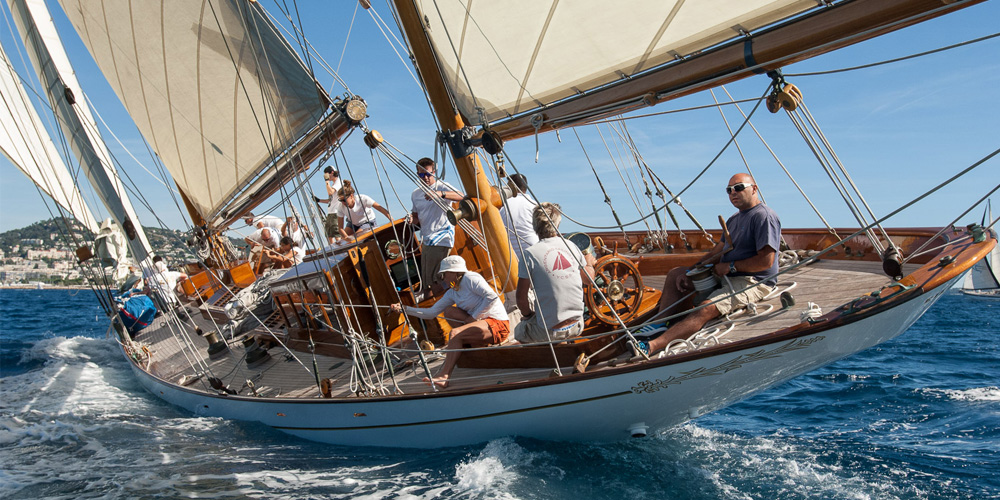 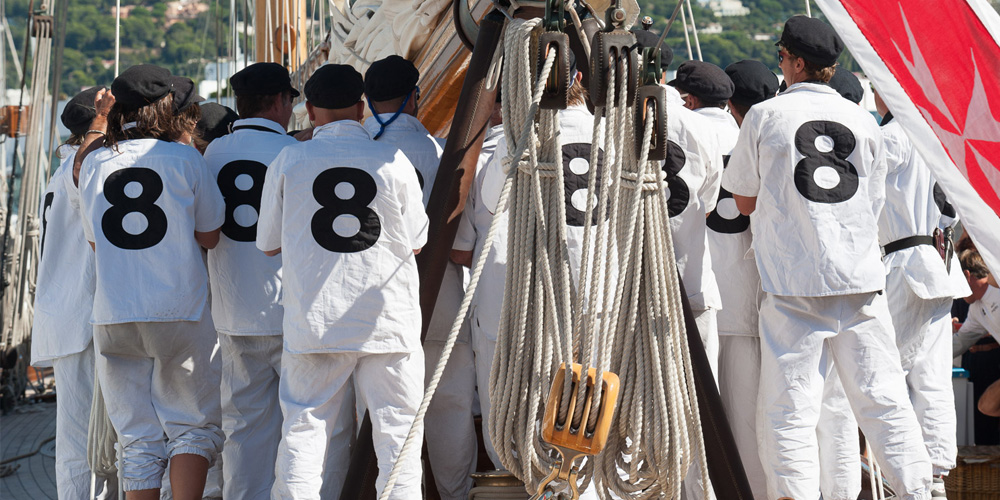 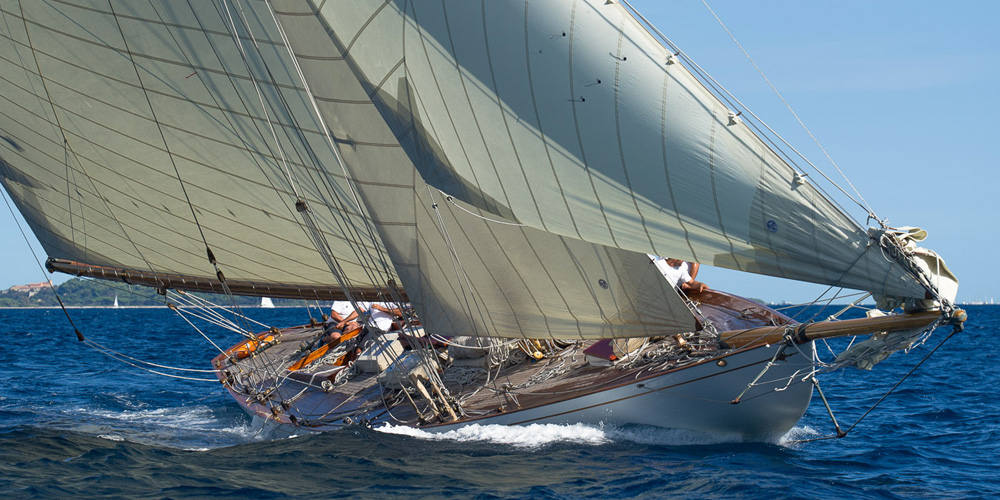 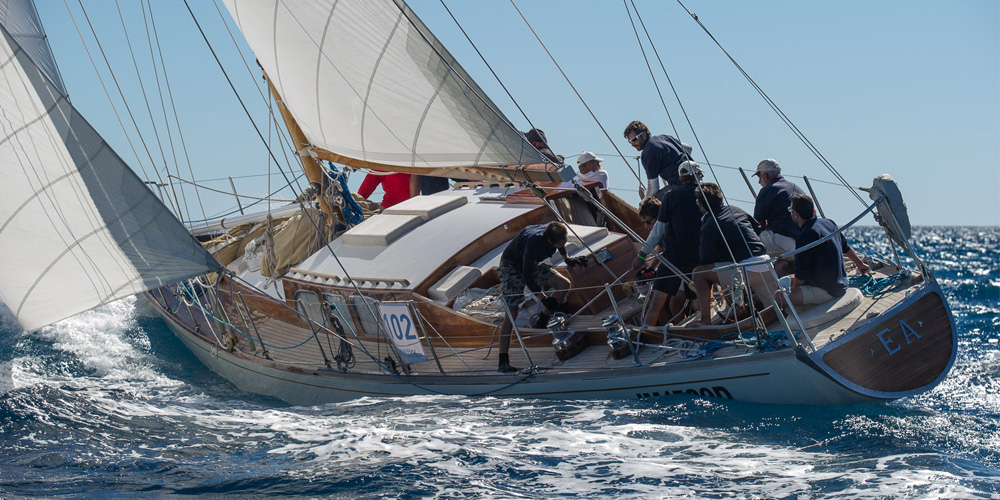 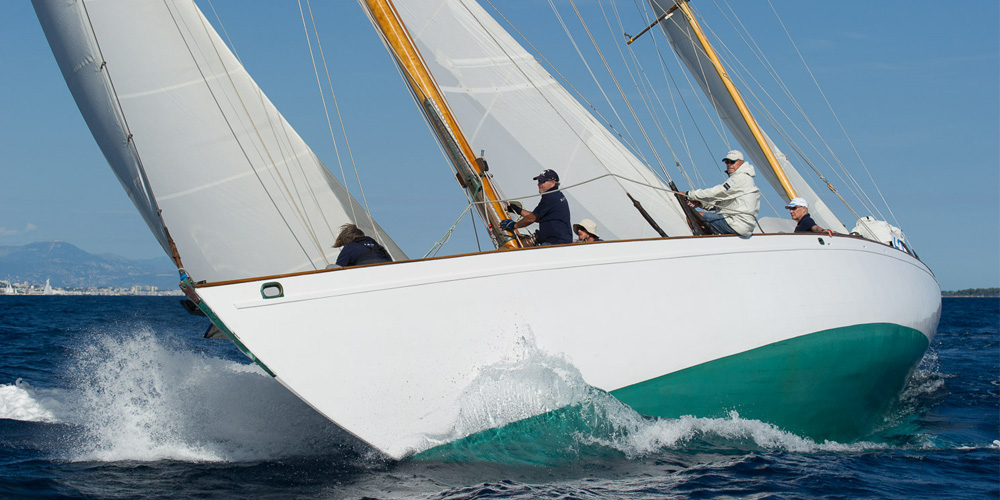 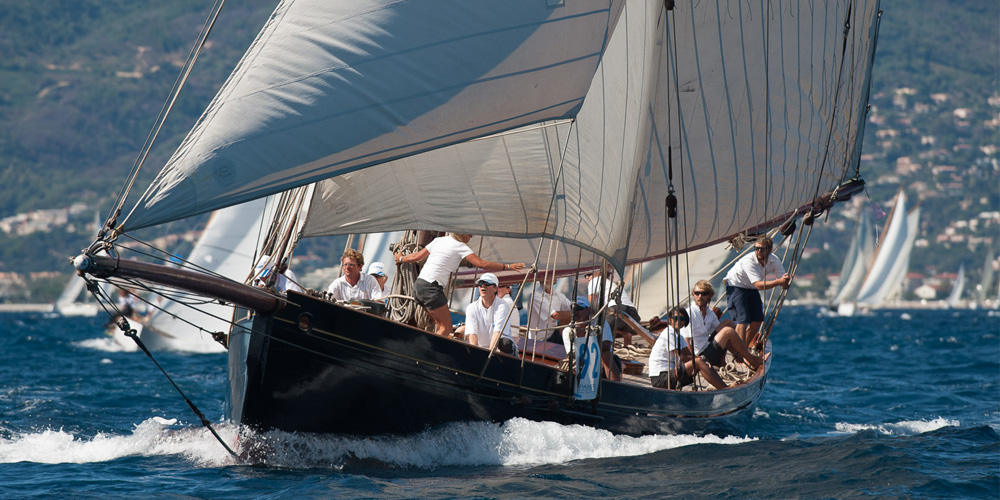 The 37th edition of the Régates Royales 2015 came to an end on Saturday in Cannes. The seventy-nine classic yachts profited from a whole week of summer-like conditions. This year’s edition of the traditional gathering on the Cote d’Azur showed that classic yachting is alive and well, with many veterans, but also several new boats joining in for the first time.

Perseverance, attention, focus, self-confidence and maybe a little bit of luck were needed today to decipher every puff and shift on the race area. Despite granting a great show to the many spectators crowded on the beach and on the water, the long triangular coastal race on a course set from La Napoule to the Lérins Islands, past la Croisette, was a painful effort for the seventy-nine classic yachts. The light easterly, not exceeding 8 knots and at times falling to a mere 4 knots, made the crews’ life hard today, forcing them to go as close to the beach as possible to grab even the slightest puff.

In these exhausting conditions, tactics were key to avoid any unnecessary tack, gybe or manoeuvre. A game that the afterguard of 15MI Mariska knows very well: today they led all the way, from the first mark to the finish line, beating the J Class Shamrock V in real time and accumulating an incredible margin in corrected time. Unfortunately today’s success was not enough for Mariska to grab the overall title, as Moonbeam IV got a clean score on the first three races of the regatta. It is then Moonbeam IV to seize the gold in the Big Boats division at the Régates Royales-Trophée Panerai, ahead of her older sister Moonbeam of Fife !
It was close racing among the gaffers too as Marigold, the “oldest of the oldies” needed to win today’s race to get the overall title, but the conditions were not what the Charles Nicholson design needed, and so she finished in seventh. Despite being tied at points with Tilly XV, Marigold finally managed to take hold of the title thanks to two wins in the previous races.

In the Vintage group, at the eve of today’s race, the situation was also uncertain, with three boats aspiring to the final victory. The day’s race went to Ganbare, but thanks to two first places Ea got the better of Sagittarius on the overall scoreboard while Naif jumped onto the third step of the podium.
Among the < 15 metre Marconi Italy’s California 32 Cholita won the regatta with an almost clean score, three wins out of four races. The Swiss 8MI Carron II, particularly at ease in light wind, tried to bounce back but could only manage the silver and Jalina the bronze.
When one is sailing on a yacht once owned by a president of the USA, one can overcome almost all obstacles. That was the case for Manitou, the Sparkman & Stephens yawl that, despite a disappointing fifth today, finished two points in front of Skylark of 1937 and three in front of Leonore, with the NY 40 Rowdy in fourth place overall. In the Spirit of Tradition group Helisara, the boat once owned by famous orchestra director Herbert von Karajan, despite a less than perfect performance today, claimed the highest step of the podium, with Freya 2003 getting the gold and the Australian 12MI Kookaburra III the bronze. And finally, Pitch was crowned winner among the Tofinou, Pippa finished in second and Nirvana II clinched third place.

Focus on the Godinet rule

There are very few boats from Switzerland that ventured out of freshwater and into saltwater. Two of them are racing at the Régates Royales-Trophée Panerai this year: the 8MI Carron II (Fife, 1935) and the Three Tonner Phoebus II, a regular in the Classic fleet in Cannes. At the end of the 19th century a fierce battle was on between long keels and fin-keels, two completely different design notions, originating from the different conditions on the two sides of the Atlantic. The Europeans, mainly the French and the Swiss, adopted the so called 1886 rule that allowed total freedom as far as sail area was concerned, but heavily penalized waterline, beam and hull sections. The boats were heavy, narrow, with huge overhangs and a low freeboard, and consequently not very safe. Auguste Godinet, an engineer from Lyon who often sailed on Swiss lakes, strongly influenced the country’s sailing background, by adapting the rule to local and French conditions. In 1892 he put forward a new concept: the Three Tonner rule.  Created in 1892 and modified in 1901, the rule is an original alternative to long keeled and fin keeled boats.  Considering the true hull shape by its profile at maximum beam, limiting the overhangs to half of the waterline, Godinet made the boats less extreme, more balanced and sufficiently seaworthy. Poil-de-Carotte, built by Émile Belly and Auguste Godinet is the first of a series of eleven Three Tonners. They have rather different shapes being designed by different architects like Guédon, Cactus, Herreshoff or Costaguta. Calypso (Guédon) was a heavy weight long keeled boat whilst Poil-de-Carotte (Godinet) was lighter, with a short waterline and hollow sections.  Phoebus II is an exact replica of Poil-de-Carotte, originally launched in 1903. She was built in 1991 from the ribs of Phoebus, that was in such bad condition that she could not be recovered. Since 1992 Phoebus II has taken part in several editions of the famous Swiss race Bol d’Or, the classics gathering in Brest and Douarnenez, and  many editions of the Régates Royales in Cannes.

Like every year, the Yacht Club de France organizes a delivery race between Cannes and Saint-Tropez, that will start on Sunday September 27.

“The 37th edition of the Régates Royales-Trophée Panerai was a success, especially as far as press and TV coverage is concerned, on a local, national and international level. The footfall in the village has also increased, going from 35,000 to nearly 50,000 visitors, The weather conditions were particularly favourable and the attractions at the village have also been appreciated. Our priority is safety on the water though and in this respect everything went very well, thanks also to the sailing area in the Bay of Cannes, which has once again proved to be an exceptional location.” Declared Pascal Gard, COO of the Société des Régates de Cannes.

“Once again we had the chance to welcome a true international line up, with 38 Dragons coming from all over Europe and a huge fleet of classic yachts. We have worked hard to offer new activities at the village, thanks to our sponsors and especially to Panerai, the City of  Cannes and Marine Pool… I’ve learned a lot from this edition, the passion and dedication of our volunteers was incredible. We also worked in co-operation with the local businesses, and that was a success too.” Said Jacques Flori, President of the Yacht Club de Cannes