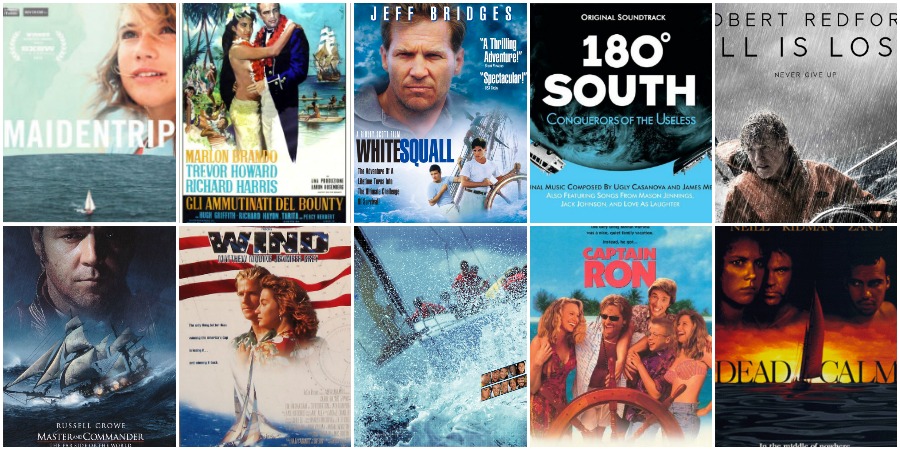 Which is the best sailing movie in the history… of sailing? We have chosen ten between our favorite. Now it’s your turn to vote: watch the trailer and then choice for your favorite!
And if we have forgotten anyone, please write to info@sailuniverse.com!

Will Parker, played by Matthew Modine, loses the Americas Cup, the worlds biggest sailing prize, to the Australians and decides to form his own syndicate to win it back.

The film follows adventurer Jeff Johnson as he retraces the epic 1968 journey of his heroes Yvon Chouinard and Doug Tompkins to Patagonia.

After a tragedy, John Ingram and his wife Rae (Nicole Kidman) spend some time isolated at sea when they come along a stranger who has abandoned a sinking ship.

A family in Chicago inherits the yacht formerly owned by Clark Gable. They decide to sail it from the island of Ste. Pomme de Terre to Miami, and they sail with the assistance of Captain Ron (Kurt Russell) and their lives will never be the same again. We have to be honest: one of our best sailing movie!

Fifteen young sailors… six months of intense training… one chance at the brass ring. This documentary tells the story of a group of intrepid and determined young men and women, on the cusp of adulthood, as they embark on life’s first great adventure. Racing a high-performance 52-foot sloop in the TRANSPAC, the most revered of open-ocean sailing competitions, the crew of “Morning Light” matches wits and skills in a dramatic 2300 mile showdown against top professionals. From their earliest training sessions in Hawaii conducted by world-class teachers through their test of endurance on the high seas, they form an unbreakable bond in the process of becoming a singular team that is greater than the sum of its parts.

The Bounty leaves Portsmouth in 1787. Its destination: to sail to Tahiti and load bread-fruit. Captain Bligh will do anything to get there as fast as possible, using any means to keep up a strict discipline. When they arrive at Tahiti, it is like a paradise for the crew, something completely different than the living hell aboard the ship. On the way back to England, officer Fletcher Christian becomes the leader of a mutiny.

After a collision with a shipping container at sea, a resourceful sailor finds himself, despite all efforts to the contrary, staring his mortality in the face.

14-year-old Laura Dekker sets out on a two-year voyage in pursuit of her dream to become the youngest person ever to sail around the world alone.

During the Napoleonic Wars, a brash British captain (Russell Crowe) pushes his ship and crew to their limits in pursuit of a formidable French war vessel around South America.